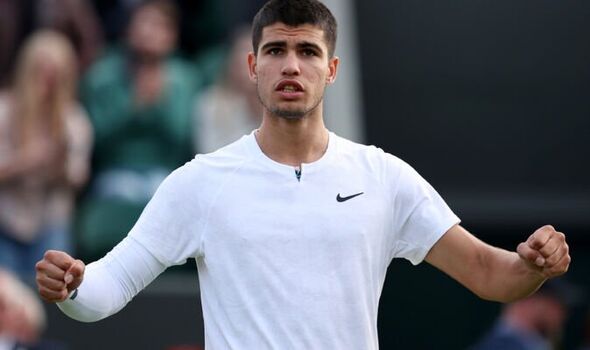 Carlos Alcaraz says he is growing into his second ever Wimbledon campaign and he could be one of the main challengers to Rafael Nadal and Novak Djokovic’s title charge. The 19-year-old shot to prominence earlier this year when he reached the Indian Wells semi-finals before winning the Miami Open.

He then had a storming clay campaign winning titles in Barcelona and Madrid and falling at the quarter-finals at the French Open. Nadal, Djokovic and even Roger Federer have been speaking out on the teenager’s potential, with many tipping him to be a future Grand Slam champion.

This year’s Wimbledon may be a little too soon with Alcaraz being unproven on grass. His warm-up for the All England Club consisted of a couple of exhibition matches at The Hurlingham Club in Fulham.

The lack of preparation showed as Alcaraz needed five sets to beat Jan-Lennard Struff in the opening round. He was much more convincing in the second round though, dispatching Tallon Griekspoor in straight sets.

“Yeah, felt more comfortable today than the first round,” Alcaraz said after his latest victory. “But obviously, as I said, I need more hours on court, on grass, to feel more comfortable.”

Those extra hours will come when he takes on No 32 seed Oscar Otte in the third round, with both players looking to reach the second week for the first time in their careers.

Alcaraz opened his campaign in SW19 on Court 1 and entertained the Court 2 crowd a couple of days later. If the Spaniard continues his form, it won’t be long before he is treated to a Centre Court appearance.

“Yeah, enjoy a lot. I mean, the crowd is amazing. Of course, playing on grass is so beautiful for me. I still saying I like play on grass and I enjoy playing here in Wimbledon.” 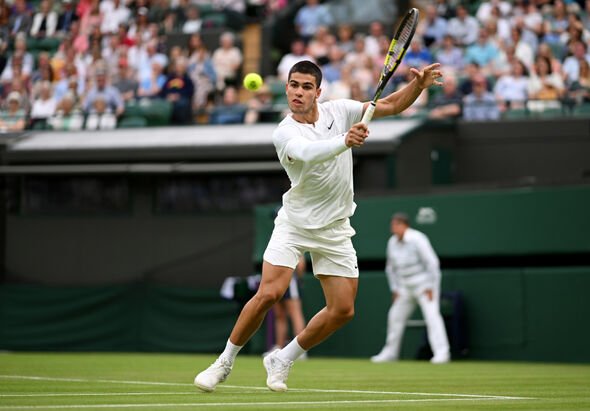 Alcaraz’s biggest challenge could come in the quarter-finals when he takes on top seed and world No 3 Djokovic. British No 1 Cameron Norrie is a potential semi-final opponent, and fellow countryman Nadal may await in the final.

Djokovic and Nadal have benefitted from the withdrawal of Matteo Berrettini due to Covid, with the Italian considered a pre-tournament favourite.

World No 1 and No 2 Daniil Medvedev and Alexander Zverev did not enter the tournament, meaning Alcaraz is one of the few players left in the draw who has the weapons to seriously upset the two icons.