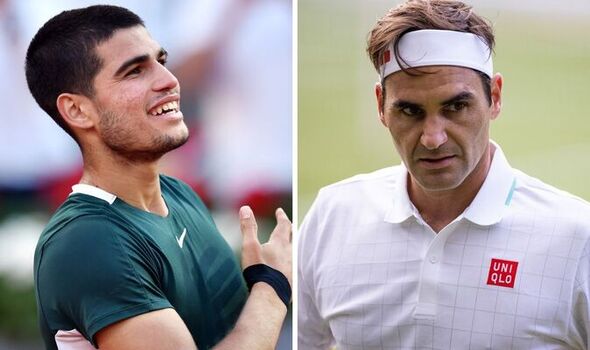 Carlos Alcaraz could take home £890,000 (€1,041,570) if he defeats reigning champion Alexander Zverev in the Madrid Open final, taking his overcall career earnings just below the £5 million mark for the first time. The 19-year-old has already been tipped to exceed Roger Federer, Rafael Nadal and Novak Djokovic to become the GOAT of tennis and could end up out-earning them too with millions already in his pocket at the age of 19.

And he will be taking home even more on Sunday after reaching both his second-successive final and his second at Masters 1000 level in Madrid. If he can defeat last year’s champion Zverev, he will receive a £890,000 (€1,041,570) winner’s cheque, while he is guaranteed to pocket at least £486,000 (€568,790) alone for reaching the final if he ends the tournament as the runner-up.

A title win would see Alcaraz’s career earnings creep up to £4,405,949, putting him close to the £5 million mark and allowing him to surpass the figure in dollars, at $5,436,721. While it’s still a long way off the likes of Federer’s £106 million ($130,594,339), it’s a huge amount for someone who is just 19 years and three days old, and he could go on to surpass the Big Three in his career after already being tipped to outdo them in the GOAT race.

JUST IN: Nadal already in Rome as forgets Alcaraz loss before French Open

Rick Macci, the legendary coach who has a talent for spotting tennis’ next big stars after discovering the likes of the Williams sisters as young teenagers, claimed the Spaniard would go on to outdo Federer, Nadal and Djokovic to become the best player in the history of the sport after he beat Nadal for the first time in Friday’s quarter-final.

“I have seen Federer, Nadal and Djokovic when they were little, but in the last 30 years I have not seen anyone like Carlos Alcaraz,” the seven-time United States Professional Tennis Association coach of the year said. “I can see this boy becoming the greatest player of all time.”

As well as Serena and Venus Williams, the American has also coached three more world No 1s in Jennifer Capriati, Andy Roddick and Maria Sharapova, but shunned all of his previous protegees to declare the Madrid Open finalist the best player he’d seen in decades. After Alcaraz’s third-round win over Norrie, Macci tweeted: “Saw last 2 sets of ALCARAZ/NORRIE.

“I said he was the JOKER /FED/RAFA wrapped in one! I was wrong. I FORGOT AGASSI ALSO!!!! KID IS THE BEST I HAVE SEEN IN LAST 40 YEARS! SPECIAL LIFETIME TALENT!” Alcaraz has already beaten one of Nadal’s records, surpassing him to become the youngest Madrid Open finalist in history. He was the youngest champion at Miami Open earlier this year where he won his first Masters 1000 title, and is hoping to replicate the achievement at the Caja Magica on Sunday.