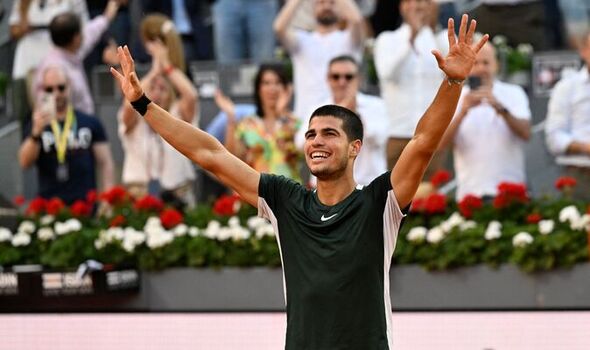 Carlos Alcaraz has reacted to becoming the only player ever to defeat Novak Djokovic and Rafael Nadal back-to-back on the clay after downing the world No 1 6-7(5) 6-4 7-6(5) in their first meeting to advance to the Madrid Open final. It comes a day after he scored his first victory over his compatriot in his third attempt.

Alcaraz came through a three hour and 35 minute battle to defeat Djokovic in what was the teenager’s first meeting with the world No 1, as he recovered from a set down. It came one day after he clinched a maiden victory over 21-time Grand Slam champion Nadal in their third meeting, and Alcaraz now finds himself in the Madrid Open final.

It makes the world No 9 the first player in history to defeat Djokovic and Nadal back-to-back on clay, and the first teenager to beat them in consecutive matches anywhere. Speaking after his tight three-set victory over the three-time former champion, the four-time title winner reacted to his historic victories over the two legends of the game.

“Well this make me a lot of confident right now to play the final tomorrow,” he said. “I mean I know that I’m playing a really good game.” And looking ahead to the future, the seventh seed was happe to have the experience to go on and beat top players.

JUST IN: Madrid finalist is richer than Federer, Nadal and Djokovic combined

“For the rest of the season, I think that I am able to play against the best players in the world, beat them as well. So it makes me a lot of confidence.” Now up to world No 6 in the live rankings, Alcaraz was also asked whether he thought there were any limits to what he could achieve following his monumental victories over Nadal and Djokovic, and replied: “I don’t think so.”

He continued: “I mean, I just try to make results, to put a good game in every tournament, to still be there with the best in the world. I mean tomorrow I will go for it for the final as I did in Miami. And yeah, really really happy to be able to play a second Masters 1000 final.” Alcaraz also admitted he “didn’t know” what made the difference in such a closely-fought semi-final against the world No 1, enjoying his first victory over a top-ranked player.

Alcaraz is now up to nine match wins in a row after lifting the recent Barcelona Open title. He could face Tsitsipas, his quarter-final victim in Barcelona, in the final with the Greek taking on defending champion Alexander Zverev in the second semi-final on Saturday evening. The Spaniard has never beaten last year’s winner Zverev but has not faced the German since his incredible rise began this season.