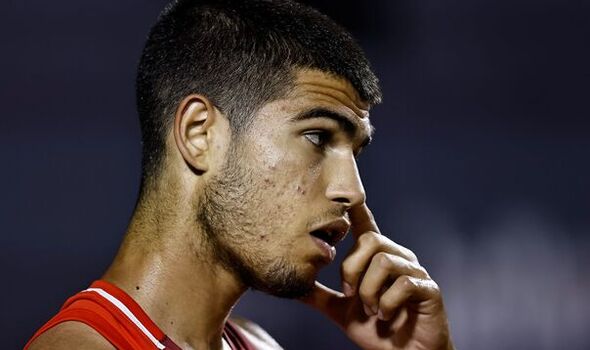 David Ferrer has warned the “special” Carlos Alcaraz of the perils of having to follow Spanish compatriot Rafael Nadal. At just 18, Alcaraz has already cemented a reputation as a future star of the sport, having won three ATP titles in 2022 in Rio, Miami, and Barcelona, and risen up to No 9 in the world rankings in the process.

Inevitably, that has drawn comparisons with Spanish compatriot Nadal. The 35-year-old defied the odds at the start of the year when he beat Daniil Medvedev to claim the Australian Open, meaning an unprecedented 21st Grand Slam title.

Prior to that, he has already won the Summer Set, and also went on to win the Mexican Open before reaching the final at Indian Wells. There however, his winning run was ended by Taylor Fritz, after which he revealed he had suffered a stress fracture in his rib.

He will return to action next week though at the Madrid Open, with the draw throwing up the possibility of a mouth-watering quarter final between him and Alcaraz. And ahead of that potential clash, another Spaniard, former pro-player David Ferrer, has described how he first noted the potential of the youngster four years ago.

Having enjoyed some rallies with him and played a tie-break, Ferrer said he immediately realised the talent on show:  “I’m not saying it to look clever, but right then I saw something special in him, something different to any other player.”

Nadal was the same age as Alcaraz when he broke into the world’s top 10, and Ferrer, a 2013 French Open finalist, said he saw similarities. However, he also warned: “But I don’t like comparing them, because what Rafa has done is huge. He’s a legend of tennis, the best player in history.

“Comparing them would be a big burden for Carlos. He will be a player who has a chance to be the No. 1 in the world. He will have a lot of chances to win Grand Slams, but he has his whole career ahead of him.

“Comparing them would be a big burden for Carlos. He will be a player who has a chance to be the No 1 in the world. He will have a lot of chances to win Grand Slams, but he has his whole career ahead of him.”

The teenager will be considered a contender for the French Open next month, whilst Nadal will be looking to extend his imperious record at Roland Garros. Of his 21 Slam wins, 13 have come in Paris.