Teen sensation Carlos Alcaraz became the youngest ever male world No.1 tonight by winning the US Open title in stunning style. Alcaraz faced Casper Ruud in a straight shootout for their first Grand Slam title and to go to the top of the world rankings.

And after a rollercoaster encounter full of outrageous shots and rallies, the new Spanish superstar won 6-4 2-6 7-6 6-3 amid raucous scenes in the Arthur Ashe Stadium.

Chants of “Ole, ole, ole, Carlos, Carlos” rang around the biggest stage in tennis like a football match. It was a celebration of tennis on 9/11.

These two young stars – French Open finalist Ruud is only 23 – are now the top two in the world with  Rafa Nadal now No.3, Daniil Medvedev No.4 and Novak Djokovic No.7.

Fans will argue that last year’s champion Medvedev was banned from Wimbledon while Djokovic’s refusal to get a vaccine has seen him ruled out of the Australian Open and all events in the USA while he got no points for reclaiming his Wimbledon title. 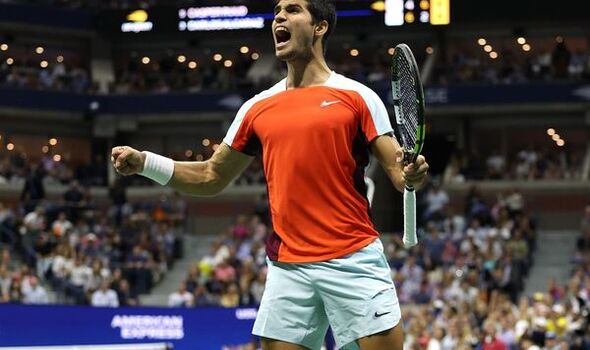 But there is no doubt the appeal of the brilliant Alcaraz – and he promises to be at the top of the game for the next decade.

With both men playing their first Grand Slam finals, it was a nervy opening under roof with break points faced in the first four games. Alcaraz made the only break to lead 2-1 to win a high-quality opening set in 49 minutes.

But the biggest talking point came from a great act of sportsmanship from Ruud on the first point of the eighth game. Ruud scooped a drop shot over Alcaraz’s head and the Spaniard ran back and slapped a forehand into the net. But he immediately protested that the ball had bounced twice to umpire Nico Helworty.

To save the German official the decision, the Norwegian called the double bounce on himself and awarded Alcaraz the point. The Spaniard led the applause of the crowd before the next point.

Ruud finally got his first break – and briefly changed the momentum of the match – to lead 3-2 in the second set when he retrieved another drop shot and then put away an overhead.

The sellout 24,000 crowd in the Arthur Ashe Arena were on their feet as Ruud punched the air in celebration. The Norwegian then won the next three to draw the match level after 90 minutes.

Alcaraz had spent 13 hours and 28 minutes in winning three of the 13 longest matches in US Open history – running the equivalent of 8.7 miles – to reach his first Grand Slam final. And he looked in danger of running out of gas. 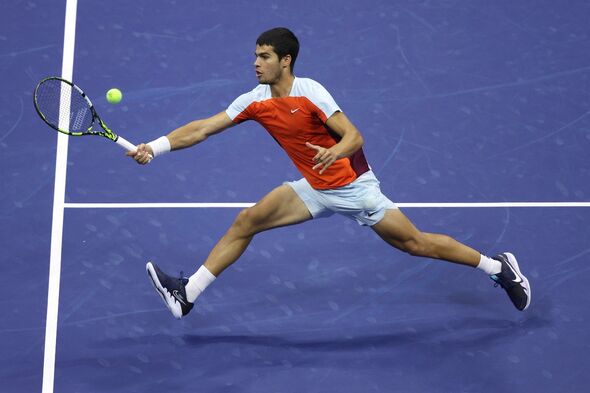 But at the start of the third set, Ruud relaxed and played a sloppy opening game and Alcaraz took a third break point with an outrageous forehand drop shot. The Norwegian broke at 2-2 in the best segment of the match. In the ninth game, even Alcaraz was smiling despite missing a forehand at the end of a sensational rally.

The Spaniard crucially saved three set point at 5-6 before winning the tiebreak 7-1 when Ruud hit a forehand long at exactly 7pm local time.

A single break in the fourth set in the sixth game saw Alcaraz serve for the match at 5-3. He dumped an easy overhead into the net at 30-0 but he said had two championship points and he took the second with a service winner before falling to the floor after three hours and 20 minutes.