Coco Gauff was struggling to stand on her own two feet when Elena Vesnina first reached the Wimbledon second round.

On Thursday, 15 years on, the teenage American took an early tumble but avoided a slip-up to beat the Russian in straight sets.

Vesnina, 34, has only recently returned from maternity leave and her body began to creak. 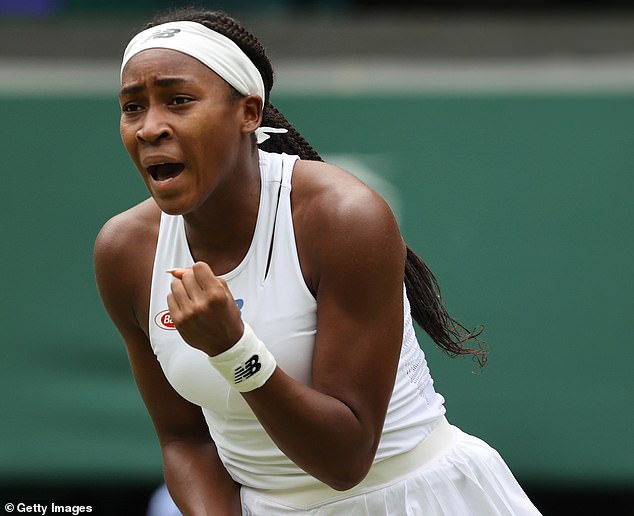 The Russian — a former Wimbledon singles semi-finalist and doubles champion — needed treatment on her back before her 17-year-old opponent, back on Centre Court after her thrilling run to the fourth round in 2019, secured a 6-4, 6-3 victory.

‘There is no other court like Centre Court,’ said Gauff. ‘It means a lot to be back. This court makes me the most nervous of any court in the world.’

If Gauff beats Slovenia’s Kaja Juvan next, she is on course to face 2018 champion Angelique Kerber in round four, after the German overcame a spirited fightback from Spain’s world No 50 Sara Sorribes Tormo. 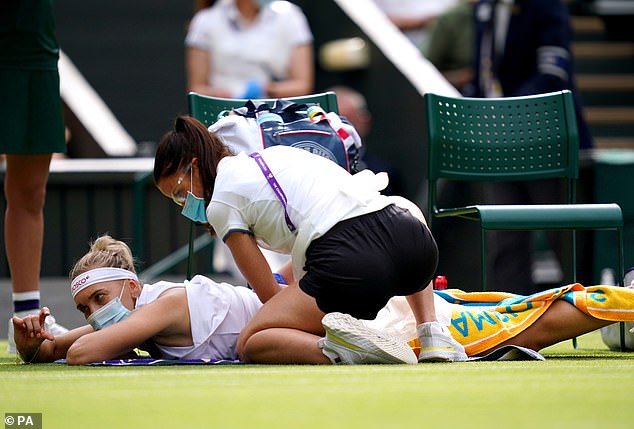 Vesina, who has recently returned from maternity leave, needed treatment on her back

Kerber triumphed 7-5, 5-7, 6-4 after nearly three-and-a-half hours. Meanwhile, No 1 seed Ashleigh Barty didn’t have it all her own way, either, as she beat Russia’s Anna Blinkova 6-4, 6-3 in an error-strewn display that included nine double faults and 33 unforced errors.

‘A few things didn’t feel quite right today,’ the Australian said. ‘That’s half the battle in sport, being able to find a way when it’s not feeling all that great.’

No such let-off for third seed Elina Svitolina, however. The 26-year-old, a semi-finalist in 2019, suffered one of the biggest upsets in the women’s draw so far, losing 6-3, 6-4 to the unseeded Magda Linette in little over an hour. Svitolina hinted afterwards that she has hit a psychological roadbump in her career.

‘You have to be strong, try to be good to yourself and try to overcome the fears, the difficulties,’ she said. 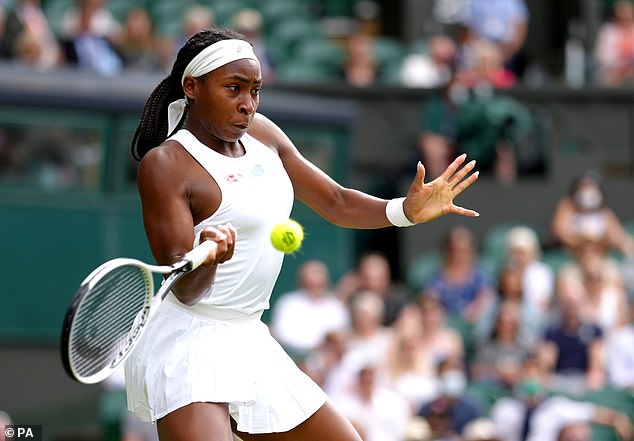 ‘Today probably I was not fresh mentally to do that.

‘I wouldn’t say it’s very smooth times in my career. It’s a tough time but it’s how you come back that matters.’

Latvia’s Jelena Ostapenko, who won the Wimbledon warm-up event in Eastbourne, overcame Daria Kasatkina 8-6 in the final set to reach round three. She took the first 6-1 before the Russian secured the second 6-3.

Tags: Coco, f, Gauff, proves, strong, too
You may also like
Latest Posts