Five unnamed players have been forced to withdraw from qualifying for next week's French Open due to COVID-19.

More than 900 tests have been conducted since Thursday at Roland Garros ahead of the delayed claycourt major. Two of the five players themselves tested positive while three are confirmed to be close contacts of a coach who returned a positive result. 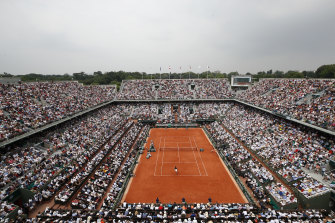 Five players have been forced to withdraw from qualifying at Roland Garros.Credit:AP

The five will self isolate for seven days with the tournament planned to begin on schedule on Monday. Six Australian men are in the qualifying draw including third seed Christopher O'Connell, who earlier this month made the second round of the US Open.

He is scheduled to face Swede Elias Ymer at 9.30pm AEST. Twelfth seed Marc Polmans gets the Australian campaign under way when he takes on Germany's Tobias Kamke from 6pm.

Meanwhile, exactly two weeks after he was defaulted from the US Open, and a day after he was warned by the chair umpire for breaking his racket in a fit of rage, Djokovic received an obscenity warning midway through a 7-5, 6-3 win over Casper Ruud in the Italian Open semi-finals Sunday.

The obscenity came in the third game of the second set, by which time Djokovic had a running dialogue with the chair umpire over a series of contested calls.

“I deserved the warning,” Djokovic, who will play Argentine Diego Schwartzman in the final, said. “I didn’t say nice things in my language.

“I had a couple of disputes with the chair umpire with those calls,” Djokovic added.

“As I understood, I was three out of three right, but doesn’t matter. Everybody makes mistakes. It’s fine. It was a kind of the heat of the battle. There is a lot of intensity on the court. A lot of pressure for him, for both players. It’s kind of whatever happens, happens.” 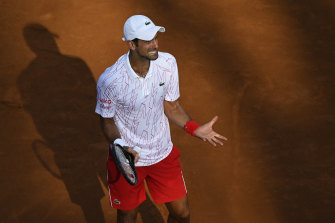 Novak Djokovic says he ‘deserved’ a warning during his Italian Open semi-final win over Casper Ruud.Credit:Getty

As opposed to his previous two outbursts, this time there were fans in the stands who could clearly hear how Djokovic dealt with his frustration.

With 1000 spectators allowed in to the Foro Italico for the first time this week, a large proportion of those in attendance were children.

“I don’t want to do it, but when it comes, it happens,” Djokovic said Saturday.

“That’s how I, I guess, release sometimes my anger. And it’s definitely not the best message out there, especially for the young tennis players looking at me. I don’t encourage that — definitely.”

Ruud was Nick Kyrgios’ opponent during last year’s Italian Open when the Australian walked off the court and threw a chair onto the red clay, leading to him being defaulted and fined.

“Some players, or especially Djokovic, (are) very passionate,” Ruud said. “Some players just by nature can show more emotions than other ones. That’s part of the game.”