Daniil Medvedev kept his Wimbledon hopes alive with an incredible comeback victory over Marin Cilic on Saturday night. Medvedev came into Wimbledon this week as the second favourite, particularly after showing good form with his victory at the Mallorca Open last month.

Jan-Lennard Struff and Carlos Alcaraz were brushed aside in relative ease in the opening two rounds.

But Medvedev faced a tricky test against No 32 seed Cilic, who equally enjoyed a strong grasscourt season heading into Wimbledon.

The 2014 US Open champion won the Stuttgart Open and was 7-1 on grass heading into Wimbledon.

And Cilic took the ascendency early on against Medvedev, who struggled to find his rhythm on Centre Court.

JUST IN: Roger Federer on verge of breaking 46-year Wimbledon record after win 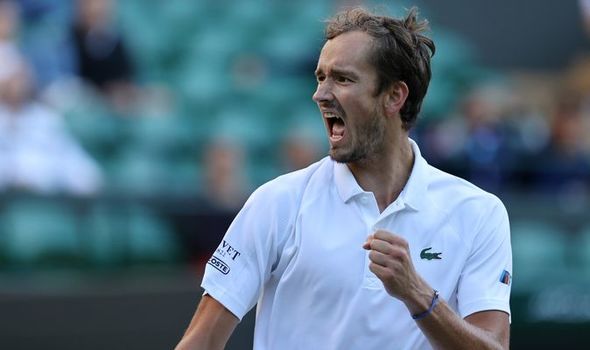 The 32-year-old won the first-set tiebreak to take a one-set lead and looked well on his way for a huge upset after taking the second.

Medvedev has made a habit of not giving up on the biggest stage though and soon came alive in the third set.

More errors were creeping into Cilic’s game and Medvedev took full advantage to bring himself back into the match.

The pendulum had appeared to change direction after that with Cilic appearing weary and there for the taking.

Medvedev soon levelled the match as he began to find his groove on serve and the fifth set proved too much for Cilic.

The No 2 seed is now through to the fourth round at Wimbledon for the first time in his career.

Medvedev now takes on Hubert Hurkacz in the next round with a potential match against Roger Federer awaiting in the quarter-finals.

And he also has a chance of taking over as the new world No 1 should he reach the final at Wimbledon.

Medvedev will take spot in the rankings if he reaches the final and Novak Djokovic fails to do so.

Tags: autoplay_video, ctp_video, Danii
You may also like
Latest Posts