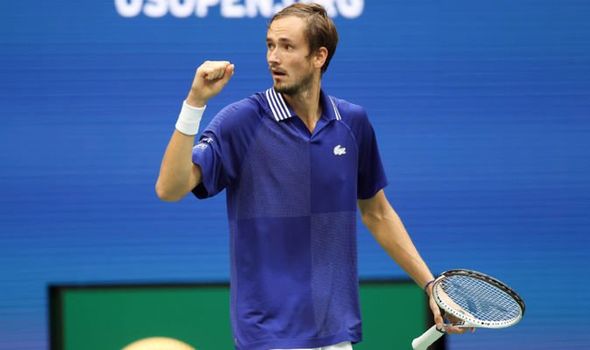 Roger Federer, Rafael Nadal and Novak Djokovic all want to go down as the greatest player of all time but Daniil Medvedev has caused them all a world of problems. The Russian beat world No 1 Djokovic in the US Open final 6-4, 6-4 6-4 on Sunday night.

Djokovic went into the match as the favourite looking to win his 21st Grand Slam title.

The 34-year-old is desperate to pull away from the record he shares with Federer and Nadal.

This year’s US Open was a glorious chance for Djokovic to cement his place as the greatest of all time because his two biggest rivals skipped the tournament through injury.

Djokovic was also trying to win the Calander Slam following his successes in Melbourne, Paris and London this season.

However, he looked a shadow of himself and was bullied on Arthur Ashe Stadium, going down with a whimper.

Medvedev rose to prominence last year and looks the complete package after 12 months of competing at the top of his game.

That will be a strong warning to the ‘Big Three’ that they may never get the answer to their GOAT debate.

If Medvedev keeps up this form then the discussion over the best men’s player of all time could run on for eternity.

Ahead of the US Open, Annabel Croft told Express Sport that a prediction had already been made that Federer, Nadal and Djokovic would end up with the same amount of Slams.

“I always remember Virginia Wade many years ago saying to me ‘I think they’re all going to end up on the same’ and she said that to me about five years ago so maybe she’s right, it was quite interesting,” Croft said.

Wade’s claim is now not looking that farfetched.

Not only has Mevedev ensured that fans must wait until 2022 to see if Federer, Nadal or Djokovic can get ahead of each other – it also leaves a question over whether they will win another major tournament.

Medvedev has now got the appetite for success on the biggest stage of them all and he only seems to be getting better and better.

There are no weaknesses with the 25-year-old’s game and Djokovic found out the hard way.

Look out next year, Federer and Nadal may just be the next heads on the chopping block.

Tags: Daniil Medvedev, Roger, US Open
You may also like
Latest Posts