Growing in confidence, Alex de Minaur believes ‘anything can happen’ if he takes care of British wildcard Liam Broady and storms into the second week of Wimbledon for the first time.

De Minaur’s pulsating four-set comeback win over rising Brit Jack Draper on Thursday night was just the tonic after the Australian No.1 had suffered a couple of tough beats in the lead-up to the grass-court grand slam.

He will now meet fellow Brit Liam Broady in the third round of Wimbledon with the business end of the tournament in sight. 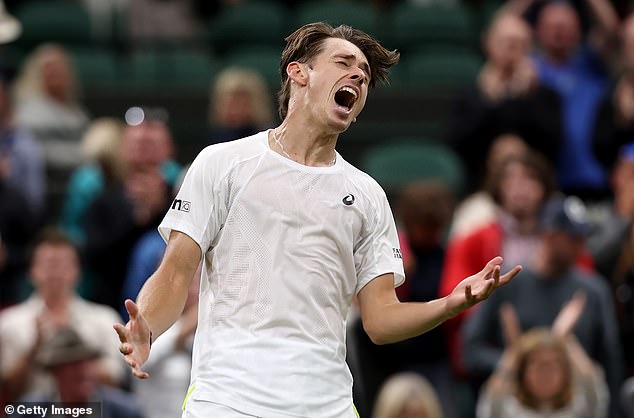 A sub-script to the 19th seed’s results on the court has been the heart-warming support he has received from the stands from girlfriend and WTA player Katie Boulter.

She said the Aussie’s fighting spirit was one of his best qualities with the world No.118 aspiring to be just like her beau.

‘He is the epitome of a fighter and someone that goes out and gives their all every single day. That’s what I aspire to be like. I feel like to have that around me and my team, it really helps me because I can push myself. He helps me do that,’ she said.

‘He is probably one of the hardest-working guys out there. I try to take a leaf out of his book because it really is impressive. I’m very lucky to be in the position I am, that I get to see it day in, day out.

‘We’ve seen him play many incredible matches against top players. He can beat them. Ultimately those are the matches that are going to give him the spotlight. I know the work he puts in will give it to him.’

In fighting back from a set down against an inspired opponent playing before an adoring home crowd on Court 1, de Minaur feels he’s turned a corner and found some priceless momentum heading towards the business end of the championships.

‘I see that match as a very high-quality win against an opponent who has been playing some great stuff, great tennis,’ de Minaur said.

‘I felt like this win was a big win for me. Just because I have had a couple of tough matches that kind of haven’t gone my way.

‘I have been trying to do the right thing. So this is a great win for general morale, a boost that I think I needed.

“So hopefully I can take this win and start relaxing a little bit more, playing a bit more freely and really believing in myself.”

Boulter is also British but Broady joked that he wouldn’t chastise her for supporting her Australian boyfriend instead of a fellow Brit in the fourth round encounter.

‘Obviously I’m playing Alex de Minaur in a day and you might see Katie Boulter in his box. I won’t hold it against her,’ he laughed. 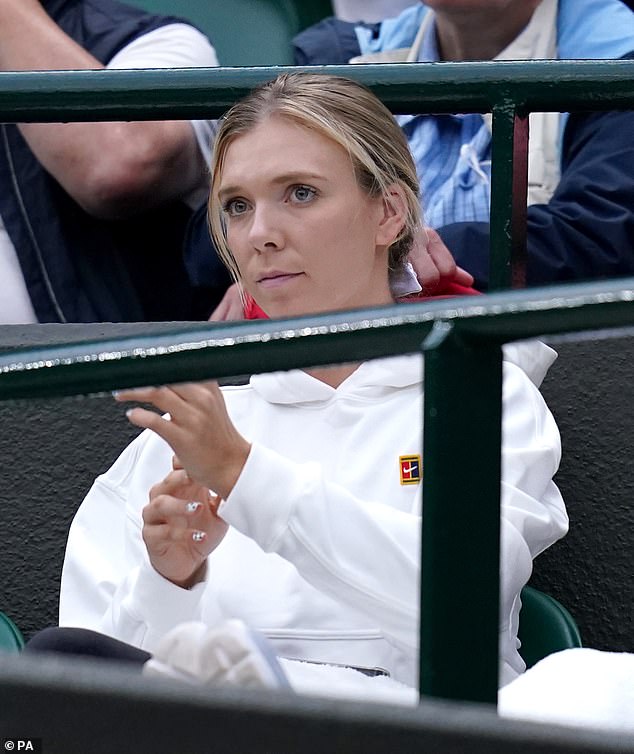 De Minaur was a tiebreak away from falling two sets behind against the emerging star of British tennis in Draper.

‘He was playing at a very high level, and I just kind of hung in there. I just stuck in. I did what I could. I stayed in there,’ de Minaur said.

‘Basically, you’ve just got to hang in there, hang in there as much as you can, stay tough. If you can get yourself to a second week, anything can happen.

‘So that’s what I’ve been trying to do. So, just a step closer.’

The former US Open quarter-finalist will rarely get a better chance to crack the last 16 at the All England Club. 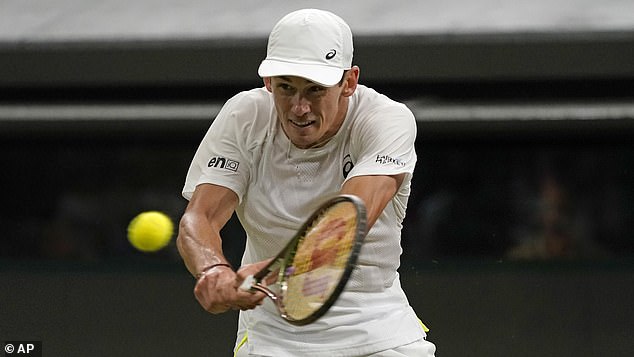 De Minaur knows Broady, like Draper, will also grow an extra leg competing on show court No.1 but, at No.139 in the world, the home hope, in reality, is hardly an imposing third-round opponent for the top-20 favourite.

‘I’m just stoked to be where I am right now. So I will cherish it, have an easy day tomorrow and I will hopefully be ready to go straight back again,’ de Minaur said.

De Minaur’s reward for beating Broady would be an enticing last-16 encounter with American 29th seed Jenson Brooksby or Chile’s world No.43 Cristian Garin on Monday.