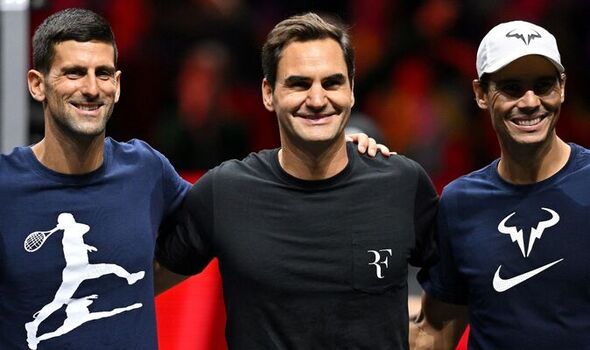 Novak Djokovic has downplayed the significance of Roger Federer’s retirement marking the end of the Big Three era as he reminded fans his rivalry with Rafael Nadal was still well and truly alive. Both men were present for the end of Federer’s career at the Laver Cup in September, which came just weeks after 19-year-old Carlos Alcaraz signalled a changing of the guard by winning the US Open and becoming world No 1.

Federer’s 24-year career drew to a close at the Laver Cup just over a month ago, as the Swiss icon returned from a 14-month hiatus for his last dance, playing one final match alongside Nadal in the doubles before remaining on Team Europe’s bench to cheer on the rest of the squad – including Djokovic – over the weekend.

Many saw the 41-year-old’s retirement as the beginning of the end of the Big Three era, especially with Alcaraz’s recent success at the US Open as he became the first teenager to win a Grand Slam since Nadal in 2005 and the youngest world No 1 in ATP history, signalling the start of a new generation. But Djokovic has now downplayed the significance of Federer’s retirement as he remains motivated to keep battling with Nadal to make history in the sport.

“I live in a very special moment of tennis history, maybe the greatest, and I feel incredibly honoured to be in a situation to write the history of our sport,” the 21-time Grand Slam champion told the RMC podcast. As Djokovic discussed Federer’s recent retirement, he was quick to reassure fans that the Big Three lived on through himself and Nadal with a six-word message.

The 90-time title winner claimed that “a big rivalry was still running” between himself and the current world No 2, downplaying any speculation of an imminent retirement for himself or Nadal. “The moment hasn’t come, either for him or for me,” he added.

And Djokovic is still vying to match some of Federer’s records following the 41-year-old’s retirement, as he has a chance to equal the Swiss star’s haul of six titles at the ATP Finals this year in Turin. The world No 7 currently has five trophies from the year-end championships to his name.

Djokovic hasn’t won the ATP Finals since 2015 but this year could finally be his shot at matching Federer as he will come into Turin fresher than most of his rivals after being unable to play the North American swing this summer because of his unvaccinated status. The Serb has not lost a match since returning in Tel Aviv at the end of September, picking up the title in Israel before winning the Astana Open the following week, and has now started his Paris Masters campaign with a win.

Despite being 10th in the race for the ATP Finals with only the top eight qualifying, Djokovic earned a spot thanks to his Wimbledon win as the ATP allow a Grand Slam champion from that year to qualify if they finish in the top 20 of the race.