Novak Djokovic’s mother, Dijana, says her son probably did not know he was COVID-positive when he interacted with the community at events after his positive test.

The world No.1 men’s tennis player on Monday won a legal challenge to the cancellation of his visa and on Tuesday practised on Rod Laver Arena.

The federal government has not yet said whether it will move to cancel his visa again under Immigration Minister Alex Hawke’s sweeping powers.

Documents released as part of the court action show Djokovic’s lawyers claimed he tested positive for the virus on December 16.

He was pictured publicly in the following days at events – at one time, maskless – and his brother later refused to answer questions about his attendance while COVID-positive.

Speaking to Channel Seven’s Sunrise on Wednesday, Dijana Djokovic said her son probably did not know he was positive.

“I really cannot say anything about that, but it’s maybe the best to ask him.”

In a statement released after the interview with his mother, Djokovic apologised for an error of judgment, saying he had received a positive COVID-19 result on the night of December 17 after submitting the test the day before.

He went on to say he “felt obliged” to go ahead and conduct an interview with French media organisation L’Equipe on December 18 because he “didn’t want to let the journalist down, but did ensure I socially distanced and wore a mask except when my photograph was being taken”.

“While I went home after the interview to isolate for the required period, on reflection, this was an error of judgement [sic] and I accept that I should have rescheduled this commitment,” he said.

Djokovic said he was making the social media post to address the “continuing misinformation about my activities and attendance at events in December in the lead up to my positive PCR COVID test result”.

On the form, Djokovic stated he had not travelled in the 14 days before his January 6 arrival in Australia.

Djokovic was, in fact, in Belgrade on Christmas Day and later spotted training in Marbella, Spain, on December 31 and January 2.

His mother said: “I cannot say because I am not into it – I don’t know exactly the whole issues.

“I’m reading in the newspapers. I didn’t talk [with Novak about that] so I really cannot say anything about that,” she said.

“What I can say [is that] Judge Kelly had seven hours to listen to both sides, and then he decided that Novak is free. So for me, this is [a] closed book.” 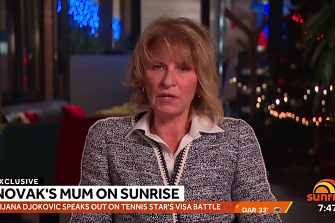 Djokovic also addressed the travel declaration issue in his statement on Thursday, saying his agent made an administrative error when completing the forms.

Djokovic said his agent “sincerely apologises” for ticking the incorrect box on the form, which meant he falsely claimed he had not travelled anywhere in the 14 days prior to his arrival in Australia despite being in Spain.

Ms Djokovic said she was “very worried” her son would be kicked out of Australia, and it was unfair that Mr Hawke could unilaterally rule on his deportation.

“I was reading in the newspapers that there is the possibility they still do want to deport him. I’m very worried,” she said.

“We are all praying that he will stay and he will play. Don’t throw him out; he’s a tennis player, he’s not a politician, he’s not a criminal, he’s not a murderer.”

Ms Djokovic said she did not understand how one man could make the decision after the court decision to deport the world No.1, but admitted she was not familiar with Australia’s rules.

She said that even as his mother, she could not pressure Djokovic to be vaccinated against COVID-19.

“I don’t know what is the problem if he does not want to be vaccinated – that’s his choice,” Ms Djokovic said.

“You can’t pursue him or pressure him to do this … you can do every day [a] PCR or whatever you want and you will see that he’s healthy, so what’s the problem?”