Novak Djokovic sparked more confusion about his bizarre Wimbledon drink habit by refusing to reveal what was in the bottle that he inhaled during a match at Wimbledon and then claiming it is ‘magic potion’.

The men’s top seed, who beat British hope Cameron Norrie to claim a place in Sunday’s Wimbledon final, has been the subject of debate on social media after he was seen appearing to inhale from a drinks bottle during a change of ends.

He replied: ‘Magic potion, that is all I can say.’

His bizarre habit of seemingly inhaling contents from a drinks bottle in his Wimbledon quarter-final match created quite a stir among tennis fans.

The Serb appeared to look towards his support crew sitting courtside during his last-16 win over Tim van Rijthoven before seemingly breathing in the contents rather than drinking them. 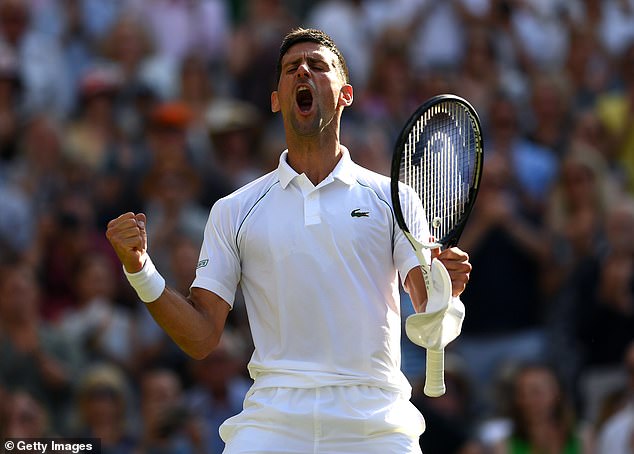 When asked about his habit, the six-time Wimbledon champion said it was a ‘magic potion’

One fan said: ‘I would very much like to know what was in this bottle. It certainly wasn’t liquid, and he gestured to his coach before inhaling it. Very odd.’

According to The Telegraph, the Serbian star, 35, is one of many professional players opting to take unmixed energy supplements or isotonic powder during matches.

‘You wouldn’t really get any benefit from doing it mid-match, but I’m sure this is isotonic,’ a source told the publication.

‘A lot of players have started eating powder, even pre-workout isotonic powder.

‘They’ve started eating it without water. It’s mainly pre-workout stuff because it gives them a buzz.

‘I imagine it’s disgusting in the throat. It’s weird, but it is what they are doing.’

Isotonic powder is easily digestible and replenishes carbohydrates quickly when energy levels need to remain high during such elite and intense competition.

Such supplements are usually taken by dissolving the powder in water and then drunk either before or during exercise to ensure the body can perform at maximum levels. Taken with water softens the metallic taste as well as rehydrating the body.

Isotonic products can be use to load energy levels before performance or are often used during endurance sports to restore energy that has been lost during exercise. 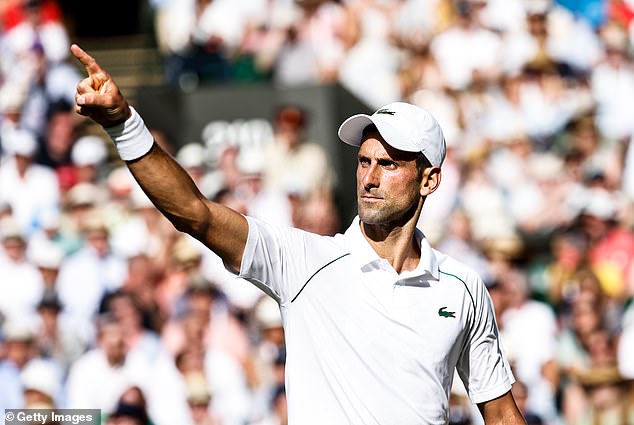 The supplements vary in strength depending on the intensity and duration of exercise.

It is common for tennis players to take nutritional drinks and snacks during matches, particularly when they go the distance to five sets.

Djokovic was in fact involved in a five-set thriller when tennis fans started to comment about squeezing something out of a plastic bottle with the No 1 seed coming back from two sets down to beat Jannik Sinner 5-7, 2-6, 6-3, 6-2, 6-2.

The top seed faced similar questions at the Australian Open two years ago and joked: ‘The liquids were magic potions that my physio prepares in his lab,’ when asked what was in his drinks bottle.

Djokovic is gluten intolerant and has an incredibly strict diet. He changed his diet after blood tests showed difficulties with digesting wheat and dairy.

He promoted smoothies, drinking water, avoiding all confectionary products – there was once a story where Djokovic, after not having chocolate for 18 months, had one singular cube melt on his tongue before he was satisfied.

Given it is unlikely he will grace the courts at the US Open due to his ongoing vaccination stance, the All England Club looms as the final venue this year where Djokovic can potentially equal Rafael Nadal’s tally of 21 career Grand Slams.