Novak Djokovic returned to Melbourne’s Rod Laver Arena for a late-night training session on Monday after the Federal Circuit Court overturned the Australian government’s cancellation of his visa.

The Serbian world No.1 took to Twitter to thank supporters shortly before his jubilant family spoke of “the biggest victory in his career” during a news conference in Belgrade. 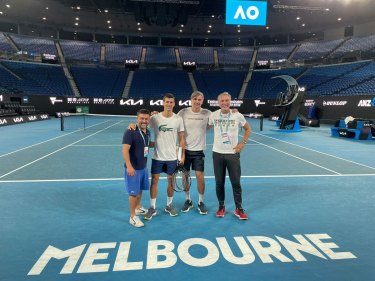 Novak Djokovic at Rod Laver Arena on Monday night with his team, including coach Goran Ivanisevic to Djokovic’s right.Credit:Twitter

“I’m pleased and grateful that the judge overturned my visa cancellation,” he wrote on Twitter.

“Despite all that has happened, I want to stay and try to compete [in the] Australian Open, I remain focused on that.

“I flew here to play at one of the most important events we have in front of the amazing fans.

“For now I cannot say more but THANK YOU all for standing with me through all this and encouraging me to stay strong.”

Djokovic posted a photograph of himself, racquet in hand and surrounded by his coaching team on the blue tennis court at Melbourne’s Rod Laver Arena.

His family said he was already training following his release from immigration detention.

“Thank God that God exists … this is the biggest victory in his career, bigger than all of his grand slams,” Novak’s mother, Dijana Djokovic, told a press conference in Belgrade. 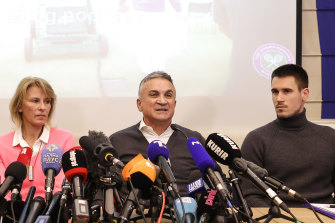 “I would like him to be strong enough to win the 10th Australian Open and 21st grand slam,” he said.

Novak’s younger brother Djordje said that “truth and justice had been served.”

“We would like to thank the justice system of Australia and Judge Kelly who led the case very neutrally, and considered every fact from Novak’s visa application, mistreatment and the court process,” he said.

“We would like to thank them for the fair and correct hearing as they were under immense pressure as the entire world was watching.”

Novak’s father described his son was a “giant.”

“He wouldn’t allow anyone to bring him to his knees … He is a giant, a fantastic young man who has never hurt anyone, he has always been in good relations with all and always tried to help,” Srdjan Djokovic said.

“But obviously the fact he was from a small, poor country was not liked by some powerful people. They didn’t like that someone from a small country could be the best in their bourgeois sport.”

But the Djokovics shut down the news conference when questioned about whether the world No.1 was mixing with the public a day after testing positive for COVID-19.

The press conference closed after the following exchange.

Reporter: “Is it true he was positive on December 16?”

Djordje Djokovic: “Yes, that’s all in the documents.”

Reporter: “Was he out in public on December 17 while infected?”

The family then broke into a Serbian folk song written especially for Djokovic.

Australian Border Force officials revoked Djokovic’s visa to enter Australia to play in the Open, saying that prior COVID-19 infection was not a valid cause for a medical exemption from the requirement that non-residents and citizens entering the country must be double vaccinated.

But Djokovic said he had been given a medical exemption after testing positive on December 16.

On December 17, he published photographs of himself on Twitter, unmasked and shaking hands during a ceremony awarding him his own Serbian stamp.

But Djokovic still faces deportation. His mother Dijana said she remained worried that Immigration Minister Alex Hawke would use his discretionary ministerial powers to remove her son from Australia.

A spokesman for the Mr Hawke said the matter was still under consideration.

“It remains within Immigration Minister Hawke’s discretion to consider cancelling Mr Djokovic’s visa under his personal power of cancellation within section 133C(3) of the Migration Act,” the spokesman said.

“The Minister is currently considering the matter and the process remains ongoing.”