Ashleigh Barty continued her dynamic start to the summer with another dominant victory at Melbourne Park on Wednesday to add to the celebrations of First Nations Day.

The world No.1, who is seeking to end a local drought at the Australian Open dating back to Chris O’Neil’s triumph in 1978, was a convincing 6-1, 6-1 victory over Lucia Bronzetti. 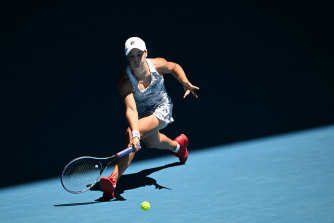 Ashleigh Barty had a crushing win in the second round.Credit:Eddie Jim

The reigning Wimbledon champion has dropped just three games in her two outings to date after a similarly supreme effort against Lesia Tsurenko in her opening-round match.

“We are exactly where we are. I felt like we had a good preparation in Adelaide,” she said.

Wednesday’s win took only 52 minutes, which was two minutes quicker than her opening triumph.

Effectively, the Australian has spent more time on the practice court this week than in winning her way into the third round.

The 25-year-old paid tribute to Evonne Goolagong, who had hoped to get to Melbourne to celebrate First Nations Day but was unable to travel from Queensland for personal reasons.

“She is an incredible human being. I’m extremely lucky to call her a friend and know she is only a phone call away. I love her to death,” Barty said.

Barty will play another Italian in the third round, though the encounter against 30th seed Camila Giorgi shapes as a trickier task if her rival produces her best tennis.

The Queenslander has won all three of their outings to date, with the most recent a third round encounter at the Australian Open in 2018 where she recovered after dropping the first set.

“She is an incredible ball striker [and is] one of the most athletic girls out here,” Barty said.

“[She is] not afraid to stand on the baseline and put you under pressure from the first strike. I will have to have my running shoes on.

“I’ll get the backhand slice out and bring in the variation and see how it goes.”