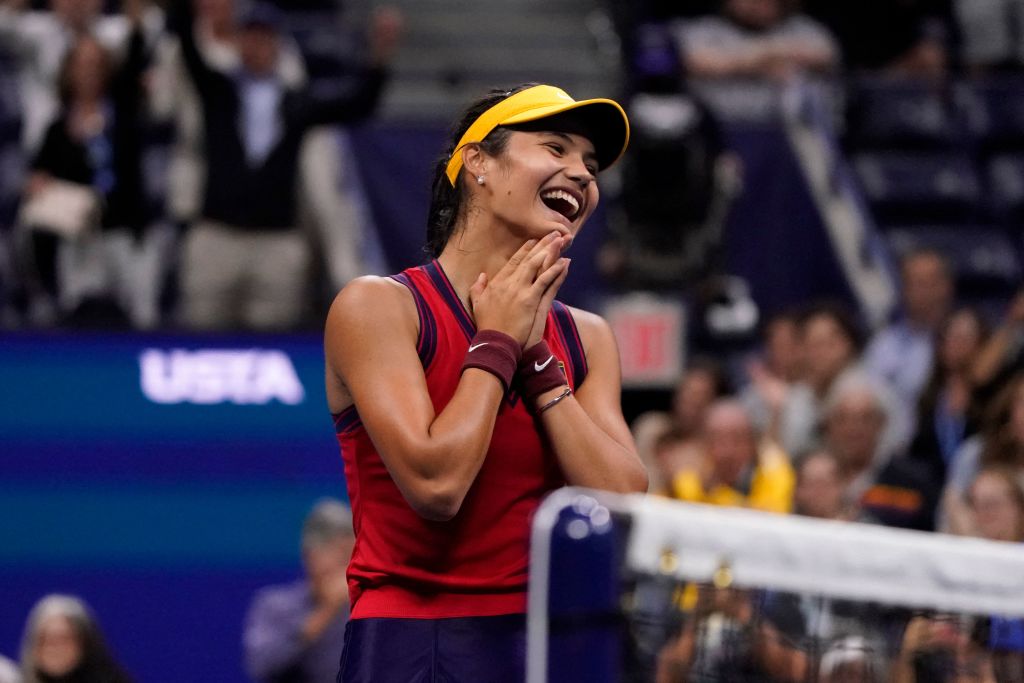 Emma Raducanau has laughed off the suggestion she should feel any semblance of pressure ahead of Saturday’s US Open final.

The British teen sensation has taken Flushing Meadows by storm over the course of the past fortnight in what is just the second grand slam event of her fledgling career.

Raducanu arrived in New York as a virtual unknown, just two months on from her breakthrough performances at Wimbledon, but sailed through the qualifiers and is yet to drop a set ahead of tomorrow’s showpiece occasion against fellow youngster Leylah Annie Fernandez.

‘Is there any expectation?’ Raducanu asked jokingly ahead of match that could earn her $2.5million in prize money. ‘I’m a qualifier so there’s no pressure on me!’

She added: ‘Honestly the time here in New York has gone so fast, I’ve been taking care of each day and before you know it three weeks later I’m in the final, I can’t actually believe it.

‘Since I’ve been here I’ve had great support. Playing under the lights on Arthur Ashe Stadium is one of the most iconic things in tennis. I was so excited.’

US Open | The records Emma Raducanu has broken

Before closing out her latest straight sets demolition job, the youngster looked over to Amazon Prime’s touchline reporter, Tim Henman, who has worked closely with Raducanu in recent weeks and she was keen to point out his influence during her incredible run to the final.

‘Tim is honestly such a big inspiration,’ she said. He has been helping me to treat one point at a time.

‘You can’t get ahead of yourself and just stay present. Today I wasn’t thinking about anyone else except for myself.’

Henman for his part, was blown away by the teenager’s victory over 17th seed Maria Sakkari, adding: ‘It’s an absolutely staggering performance.

‘If we just look at the way she came out and played, her quality of tennis from start to finish, she was so resilient. She never flinched.

‘She never let up. It was relentless. And then you’ve got to throw in the scenario of being a qualifier, an 18-year-old, with all the legends who have ever played this game at grand slam level.

‘She is the first person to qualify and reach the final. It’s simply stunning. She deserves all the credit in the world. On the biggest stage in our sport at every opportunity she plays on her terms. It’s incredible to watch.’

Tags: Emma Raducanu, Tennis
You may also like
Latest Posts