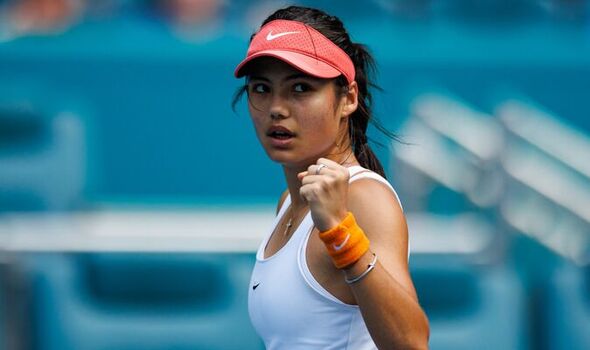 Emma Raducanu has reminded her critics that she is still “only 19” after a recent spate of early losses. The US Open champion is current playing just her first full season on the WTA Tour and is yet to make it out of the third round this year, winning two of her five matches so far, but admitted she was prepared to keep “picking herself up” and also shared her decision to spend less time on social media.

Raducanu is making her Billie Jean King Cup debut on Friday, playing her first professional match on clay against the Czech Republic’s Tereza Martincova. She will be hoping to get some wins under her belt in her debut clay swing after a tricky start to the season that has seen the US Open champion derailed by injuries and niggles.

With the opening quarter of her first full season on tour completed, the world No 12 has been reflecting and admitted she has made some recent changes to her social media habits. “Recently I have limited my time on social media. I’ve kind of gone more quiet than sometimes previously,” the Bromley teenager told the BBC ahead of her BJK Cup debut.

“It depends how everything is going, sometimes you’re really busy in training and having long days so you don’t even have time to look at your phone so I think it’s just about tapering and depending on the situation because I do love connecting and sharing with the fans that are online. But then sometimes you’ve just got to prioritise yourself and the work you’re doing.”

The 19-year-old also shared some valuable lessons she had learnt so far in her five tournaments this season, admitting the year was a “free swing” as she adjusted to life on the pro tour for the first time. Raducanu has faced some criticism after winning just two of her five matches this season and four of ten since becoming the surprise US Open champion last September but fired back at her doubters as she said she was prepared to keep coming back stronger.

“I’ve learnt that this year is just an absolute free swing at this point to be honest,” the world No 12 said. !I’m just prepared to keep picking myself back up no matter how many times I get knocked down, it doesn’t matter, I’ll just come back and I’ll do it better.”

And at such an early stage in her career, Raducanu also fired a reminder to the critics that she was still young and had time to learn, adding: “So yeah, I’m just trying to work it out and eventually I’ll get there. I’m only 19 still.”

After her BJK Cup tie, the teenager will be heading to Stuttgart for her first tour event of the clay season, the Porsche Tennis Grand Prix. She is then expected to play the WTA 1000 tournaments in Madrid and Rome before making her French Open debut.