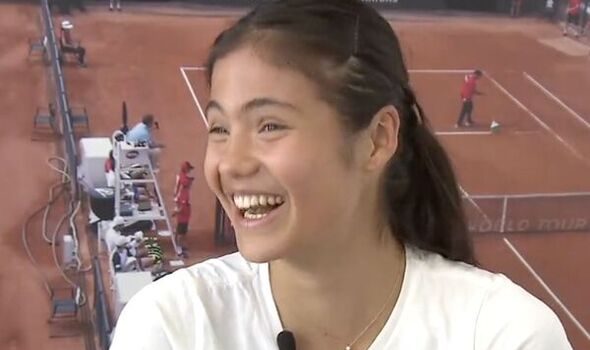 Emma Raducanu was left in fits of laughter after she unknowingly swore in Italian during an interview. The 19-year-old is in Rome ahead of the Italian Open, where she will face Canadian Bianca Andreescu in her last-64 match on Tuesday.

Speaking ahead of the clash, Raducanu was asked whether she had managed to pick up any of the language during her time in Italy so far. And she replied: “Err… I did… like, que cazzo?” The expression roughly translates as ‘What the f***’ in English, and Raducanu’s face dropped as the interviewer let out a surprised gasp.

“Is that a bad word?” she asked, before putting her hand to her face in shock. “A little bit,” replied the interviewer before laughing, after which Raducanu added: “My friend taught me that word. Cut that one. What does it mean?”

“I’ll tell you later… at the end of the interview,” came the reply, as a mortified Raducanu asked: “Really? Have I just sworn on camera??” before losing her composure and bursting out in hysterics.

She concluded: “Oh my god, erm… Bongiorno! I can’t believe I just fully swore on camera!” before laughing again. The interviewer finishes by saying: “Bongiorno is better! But the other one can be useful.”

It was a highly amusing exchange ahead of Raducanu’s next tournament, in which she will look to continue the impressive momentum she has begun building in recent weeks ahead of the upcoming French Open. The US Open champion made it to the last-16 at the Madrid Masters before eventually losing to Ukrainian Anhelina Kalinina, where she suffered with a back injury.

Speaking about her fitness issues, Raducanu said: “I think it’s just coming from a lot of intensity and overload. My back, I’m managing it. Like it’s fine. But it’s just trying to adapt again to the long matches, to the intensity.

“I think that all of the small sorts of niggles I’m getting, they’re all related and connected to each other when something is overcompensating, perhaps. Yeah, we’ll see.” Going into further detail about her recent decision to split with her coach Torben Beltz, she added: “I’d describe myself as a loner. For the past year, I’ve had a lot of people around me a lot and very often.

“To be on my own is interesting because I’m kind of finding out a lot about myself, understanding what I need and what I don’t need.”