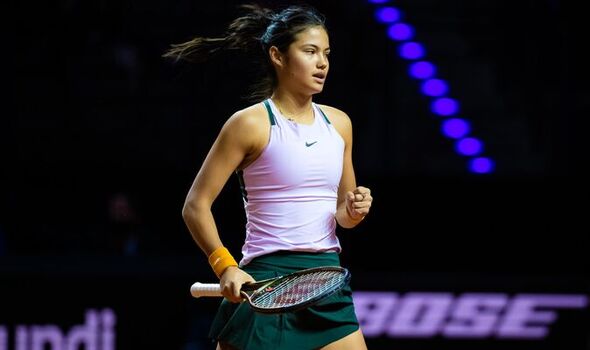 Emma Raducanu is through to the quarter-finals of the Porsche Tennis Grand Prix with a 6-0 2-6 6-1 victory over lucky loser Tamara Korpatsch. After starting strong, the world No 12 dropped the second set but recovered quickly to win through in an hour and 40 minutes. The Brit will now face a world No 1 for the first time when she takes on Iga Swiatek in Friday’s last four match.

Raducanu had gotten off to a successful start in Stuttgart on Wednesday, needing just 70 minutes to oust Storm Sanders 6-1 6-2. It was an convincing start for the eighth seed on Thursday before she was forced into a final set, doing well to shake off her lapse of concentration and fire back to book her place in the quarters.

The 19-year-old won 63 per cent of first serve return points and 88 per cent on her opponent’s second serve as she needed just 23 minutes to take the opening set 6-0. It was also an impressive display for Raducanu on her own serve, as she dropped just one point on her first serve, making 73 per cent of them.

She opened the second set with a love-hold before Korpatsch finally got herself on the board, firing her first ace of the match as she held for the first time, with the German crowd erupting in support and it seemed to give the world No 296 the boost she needed as she backed up her first hold by breaking Raducanu to lead 2-1.

The 26-year-old then saved a break point to go 3-1 up but Raducanu ended her run of games as she held for 3-2. But with the momentum now firmly with the lucky loser, Korpatsch broke again to give herself the chance to serve for the second set, closing it out 6-2 to force a decider after an hour of the match.

After holding to deuce in her opening game, it was Raducanu who stole back the momentum in the decisive third set to go up a break at 2-0. She broke again to lead 5-1 and saved a break point to close out a rollercoaster match 6-1 2-6 6-1 in an hour and 40 minutes. It means Raducanu is through to the quarter-finals in what is her best showing of the season so far, having previously made it to the third round in Indian Wells.

It’s the first time this year Raducanu has won back-to-back matches and just the second time since she became the first qualifier to win a Grand Slam at the US Open last September, having previously made the quarters in Transylvania last October.

Her reward is a maiden career meeting with a world No 1, as she takes on the super in-form top seed Iga Swiatek. Swiatek also won her first Grand Slam title as a surprise teenage champion at the 2020 French Open, though was ranked much higher than Raducanu’s then-150th place when she won in New York. Raducanu will be bidding to end the Pole’s 20 match-winning streak, which spans three back-to-back WTA titles in Doha, Indian Wells and Miami plus the Poland Billie Jean King Cup qualifier tie.