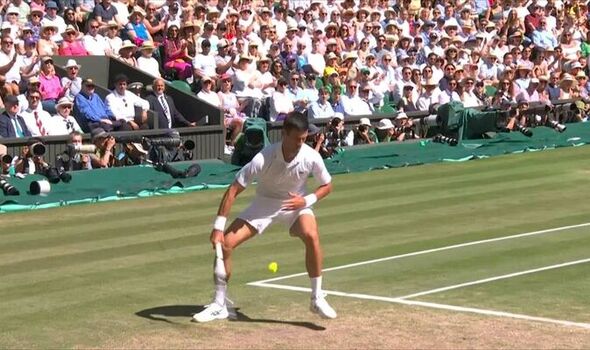 Novak Djokovic had the Centre Court crowd up on their feet after he pulled off an incredible tweener lob from the back of the court with John McEnroe comparing the shot to Nick Kyrgios. Kyrgios and Djokovic have struck up an unlikely friendship on tour in recent months after previously having multiple disagreements in the media.

Kyrgios stuck up for Djokovic when the Serbian tennis icon underwent the deportation fiasco in Australia earlier this year. And it appears as though Kyrgios’ style of play is also now beginning to rub off on Djokovic.

Djokovic was facing Cameron Norrie in the only men’s semi-final after Kygios was given a free pass to the final due to Rafael Nadal withdrawing through injury. It was a shaky start from the No 1 seed but there was no doubting his confidence on court.

Norrie was serving in the fourth game when Djokovic mishit a drop shot, allowing the Brit to come in and hit to the back of his opponent’s court. Djokovic was only going to be able to hit a return by going through his legs, but the 35-year-old somehow managed to get enough of the ball with the tweener to lob it back over Norrie.

JUST IN: Kyrgios’ five-word DM from Djokovic prior to reaching Wimbledon final 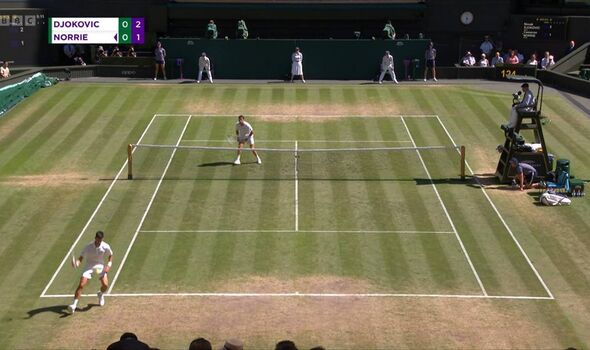 The Brit scampered back to the baseline to try and get something back over the net, but the advantage was quickly in Djokovic’s hands. Norrie’s return was weak and Djokovic was perfectly placed to make amends for his earlier drop shot with a delicate winner.

“He’s getting ready for Kyrgios,” McEnroe said on BBC. “He actually meant that shot.”

Kyrgios has almost made it his hallmark in trying something audacious in every match nowadays and tweeners or underarms serves are a regular occurence. The 27-year-old awaits the winner of Djokovic and Norrie and it was the Brit who took an early lead.

Neither player was at their best in the early rounds but Djokovic was in particular below his usual standards. Known as one of the best returners of serve in the history of the game, he was hitting just 65 per cent of returns in play in the first set.

The 20-time major champion was also getting little over 50 per cent of his first serves in and winning only 20 per cent of second-serve points. Norrie soon made the No 1 seed pay in the fifth game by breaking Djokovic again and he got the double break to the surprise of everyone in Centre Court in the seventh.

Djokovic was struggling to trouble Norrie on his serve with several unforced errors and the Brit ended up wrapping the first set up in just over 30 minutes.