Novak Djokovic has found an unlikely ally amid a storm of players condemning his behaviour – Nick Kyrgios.

The pair have traded several verbal barbs in the last few years, and Kyrgios was one of the first players to call Djokovic’s behaviour out when he hosted the infamous Adria Tour in 2020 – an event from which several players, staff and spectators contracted COVID-19. 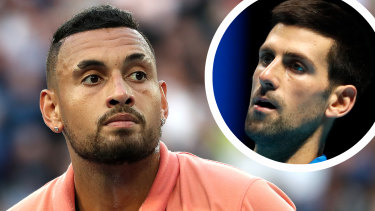 But Kyrgios didn’t join the pile-on when he shared his views on the matter on Friday.

Writing on Twitter, Kyrgios implored Australians to “do better”.

“Look I definitely believe in taking action, I got vaccinated because of others and for my mum’s health,” Kyrgios said.

“But how we are handling Novak’s situation is bad, really bad.

“Like these memes, headlines, this is one of our great champions but at the end of the day, he is human.

Kyrgios’ measured response is in stark contrast to his comments regarding Djokovic’s Adria Tour, and the exchange between the pair during last year’s Australian Open.

Responding to comments from Djokovic in which he said he had no off-court respect for the Australian, Kyrgios returned serve.

“It was a strange one for me. I read his comments,” Kyrgios said at the time.

“And when we play matches, I think I’ve been pretty good towards him.

“I’m not quite sure how you can’t respect me off the court. I feel like I’ve gone about things extremely well. Especially during the pandemic.

“I was driving around, delivering food to people during the pandemic that couldn’t get supplies. I was extremely careful about what I was doing. I didn’t want to spread the virus to anyone.

“Now, I’m actually trying to donate meal kits for people that need food and I have my own foundation.

“A heck of a tennis player but unfortunately, someone that’s partying with their shirt off during a global pandemic – I don’t know if I can take any slack from that man.

Elsewhere, other players voiced their support for Djokovic’s circumstances.

American world No.24 John Isner said on Twitter: “What Novak is going through right now is not right. There’s no justification for the treatment he’s receiving. He followed the rules, was allowed to enter Australia, and now he’s being detained against his own will. This is such a shame.”

“For me personally, it’s difficult to judge anything because we all don’t have the full information about his case,” Cilic said after defeating Djokovic’s countryman Laslo Djere 6-3, 6-2 on Friday to advance to the Adelaide International semi-finals.

“It’s difficult to constructively say something objectively [whether] the Australian government should have or should have not decided this earlier or not. That’s on their own decision.

“But looking at the situation, it’s definitely incredible that this happened the way it did, especially to Novak, that he got here, that this is still going on.

“Definitely feeling very sorry for him. Hope that this is going to be resolved very soon.”

Cilic will face the winner of Belarussian qualifier Egor Gerasimov and Russia’s Karen Khachanov in the final four.

Joining Cilic in the semi-finals is Frenchman Gael Monfils after he defeated America’s Tommy Paul 6-4, 6-1.

In the women’s tournament, Kazakhstan’s Elena Rybakina and Japan’s Misaki Doi will meet in the semi-finals after both won their quarter-finals in three sets against America’s Shelby Rogers (3-6, 6-3, 6-2) and Slovenian Kaja Juvan (6-3, 4-6, 7-6 [7-5]) respectively.

Elsewhere, in the Melbourne Summer Set, 20-time major winner Rafael Nadal progressed to the final four, after a walkover against injured Dutchman Tallon Griekspoor, where he will face Finland’s Emil Ruusuvuori.