Nick Kyrgios’ family has expressed their deep pride in the tennis star on the eve of the biggest match of his career.

The mercurial and controversial Canberran became the first Australian man since 2003 to qualify for the final of the most prestigious grand slam after two-time champion Rafael Nadal sensationally withdrew from their semi-final due to an abdominal strain.

And Davis Cup great and former Australian Open boss Paul McNamee is tipping Kyrgios to become the country’s first male Wimbledon singles champion in 20 years, even if he is to play Novak Djokovic in the final.

Christos Kyrgios paid tribute to his “loyal, protective and irreplaceable” younger brother, saying he had brought great joy to not only his family but also to his legions of fans around the globe.

″⁣Nick is one of the best humans I have had the privilege of knowing every day of his life … seeing him happy and playing huge ball on the tennis court makes me so proud of all he has become,” Christos told The Age and the Herald.

“He’s already made us the proudest family in the world – lifting the trophy would be the cherry on top.”

Kyrgios wrote earlier this year how he pushed away family and friends in a social media post about his “suicidal thoughts” as he struggled with depression, and drugs and alcohol abuse. 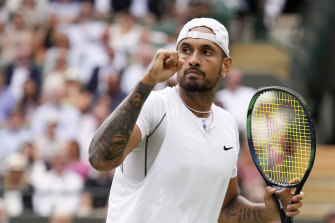 Kyrgios will play the winner of Friday night’s semi-final between Djokovic and local hope Cameron Norrie in the final on Sunday. He has the unexpected bonus of an extra two days’ rest as he chases his maiden grand slam title.

Despite not yet having booked his berth in Sunday’s final, Djokovic remains the odds-on favourite to raise the Wimbledon trophy for a seventh time and overtake the great Roger Federer into outright second for the most grand slam titles with 21, one behind Nadal.

But McNamee, a former doubles world No.1, is tipping Kyrgios to salute in the final and join the likes of Lleyton Hewitt, Pat Cash and Ash Barty as Australian Wimbledon champions.

Kyrgios is ranked 40th in the world but boasts 25 wins over opponents in the top 10 at the time, including victories over Federer and Nadal. He holds a 2-0 record over Djokovic, both victories coming in straight sets on hard courts in 2017.

“He’s got this ability to beat the top players,” McNamee said on ABC radio. “He has a winning record over Roger Federer as well. Nick Kyrgios is an enigma.

“I’ve never picked against Nadal on clay and I can never pick against Kyrgios on grass. I think he can beat anybody, and he can lose to anybody. I pick him to win the final. I do pick him to win it, even though it will probably be [against] Novak Djokovic.

“Because on a grass court with the game that he has and going in fresh now he’s got three days off he really has an unbelievable opportunity.

“I rate his chances. I rate the chances of Australia having another Wimbledon champion. We had one last year in the women’s singles, we might back it up in the men’s.”

McNamee said Nadal would have had difficulty beating Kyrgios, even if the Spaniard was fully fit.

“Rafa is an incredible warrior, you know he would’ve done everything possible to play but let’s be honest Nick Kyrgios is a highly formidable opponent on grass. This is the one surface where a fully fit Rafael Nadal would be very worried about Nick Kyrgios.”

Nadal’s injury dashes his dreams of completing a calendar slam, a feat last achieved in the men’s game over half a century ago by Rod Laver in 1969.

Nadal battled through the muscle tear to come from behind and beat American Taylor Fritz in five sets in the quarters, but doubted he could win the tournament with the injury.

“I can’t win two matches under these circumstances,” Nadal said. “The most important thing is happiness … I can’t risk that match and stay two to three months outside of the competition [off the tour].”

Watch all the action from Wimbledon ad-free, live & on demand on Stan Sport, with matches streaming in 4K UHD. Coverage of select matches commences on 9GEM from 9.30pm AEST each night