Before bushfires and the COVID-19 pandemic reshaped the way the world views Nick Kyrgios, he was painted as a poor role model and a villain.

They were tags which sent Kyrgios, by his own admission, into a spiral of depression. 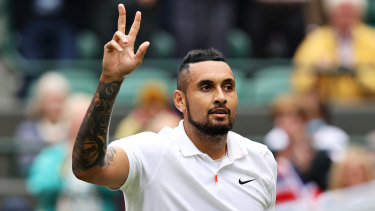 Nick Kyrgios is through to the third round at Wimbledon.Credit:Getty

“He walks around and I know for a fact he doesn’t take shit from anyone. And he’s just going about his tennis career the way he wants to go about it. That’s good to see.

“It’s good to see players not conforming to what the sport wants you to play like.”

Kyrgios says years of being criticised for his on and off court behavior has paved the way for those players to express themselves in whatever way they see fit.

“I was crucified for doing anything out of the ordinary, out of the box,” Kyrgios said. “Talking to the crowd, hitting between my legs, underarm serves. 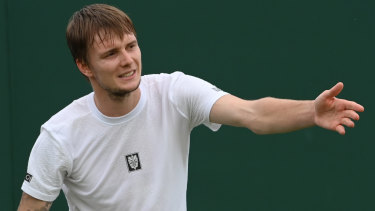 “The biggest example is when I did an underarm serve against Rafa in Acapulco. It was like I was a disgrace to the game and had no respect for the sport. Then you have guys like Kei Nishikori hitting underarm serves and people say he’s tactically switched on.

“You have players now that I love watching like Bublik, Tiafoe, these guys who are not conforming. They’re making the sport awesome.”

Kyrgios has a point. Federer, 40 next month, and Nadal, 35, are now in the twilight years of their careers. Djokovic, 34, is still at the peak of his powers but his reign will not last forever.

When the game’s three biggest stars eventually walk away from the sport, fans will flock to players who put on a show.

“But you have to have people, I believe, that are relatable and bring other fans to watch. People that are just normal. I feel like I’m one of those people.

Away from setting a unique example for the next generation of tennis stars, Kyrgios has his sights set on the second week at Wimbledon.

After that, the Australian is yet to decide whether he will take part in the Tokyo Olympics or travel to Atlanta, where COVID-related restrictions on players will be less strict.

“Ever since I was a player I wanted to compete at the Olympics but I’ve also entered Atlanta as well. I’m tossing up my options at the same time,” he said. “Whether or not – I’ve heard some things about the Olympics that are very tough, restrictions wise. No guests, none of that stuff.

“Not having the outside noise and having Kitty Chiller tell me I don’t deserve to be there when I was No. 13 in the world – I mean, it was laughable.

“I went back and forth and I was younger back then and got a bit personal. But it’s good not to have that outside noise.

“If I choose to play, it’s good that I feel like I’m part of the group and I’m more embraced now.

“We have a strong team but I’m just trying to get through this. I have a lot on my plate.”

Tags: crucified’:, How, I, Kyrgios, was
You may also like
Latest Posts