Novak Djokovic will feature in his 12th Australian Open quarter-final after breezing through his fourth-round clash with Milos Raonic.

Djokovic was no certain starter on Sunday after suffering what he believed to be an abdominal tear during his five-set win over American Taylor Fritz. 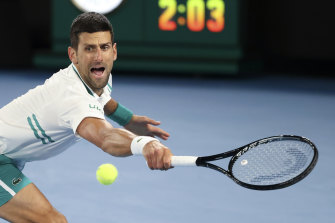 Novak Djokovic is through to his 12th Australian Open quarter-final.Credit:AP

But he took to the court and immediately looked to be playing the level of tennis that saw him cruise through the deciding set against Fritz on Friday.

Post match, Djokovic said he would not have played if the tournament had not been a grand slam.

“There was no preparation for this match. I used every single hour I had after the match against Taylor to recover. To put myself in the position to compete,” Djokovic said.

“Look, I was definitely fitter in the past. That’s as much as I can say. I am taking each day at a time. For me, more [important] than training is recovery right now so I can put myself in a good position to play the next match.

“If it’s any other tournament than a grand slam I would retire. That’s for sure. Because it’s a grand slam, I want to give my best, to try and recover with my team. I didn’t know when I finished my warm up whether I would play or not.

“I cannot complain. I won a match against a great player and hopefully I will be even better in two days.”

The ease with which Djokovic appeared to get through the match may have something to do with his fourth-round match up.

There was no better match up remaining in the Australian Open draw for the eight-time champion – he has always had an edge over Raonic.

The pair had met 11 times in the past and Raonic had never beaten Djokovic. Prior to the Sunday night clash, he world No. 1 had a 26-3 set advantage.

There were no early signs of discomfort for Djokovic and he claimed the first set in a tiebreak.

His demeanour changed in the second set.

Mentally, he started taking aim at his box and the photographers, who – in the absence of fans – have moved behind the court.

“Why are the photographers standing behind?” Djokovic asked the chair umpire early in the second set.

“It’s not their place – they’re supposed to be out there or on the side.”

He had other sprays in Serbian for his box.

The grimaces started after Raonic broke the world No. 1 for just the 11th time in their 12 matches.

Djokovic stopped chasing balls that may have been reachable if he was 100 per cent. The pain subsided as Djokovic took control of the match in the third and fourth sets.

Tags: any, I, in, Other, tournament, wou
You may also like
Latest Posts