Nick Kyrgios was still on Centre Court, watching Novak Djokovic loft the Wimbledon trophy to every corner of the arena, when he pulled out his mobile phone.

He knew that inside a Sydney apartment at The Rocks at 2.30am, the crew of basketball players who prepared him for his Wimbledon assault were all together watching him play. 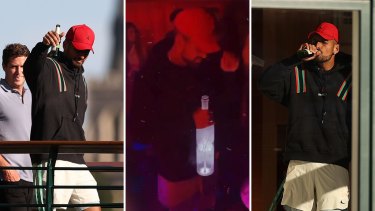 Nick Kyrgios celebrated his Wimbledon campaign with a few beers and a night out with his crew at the lavish Wyld nightclub in London.Credit:Getty

Kyrgios, having FaceTimed the group, turned the phone in the direction of Djokovic. They joked about inviting his new buddy down to King George V Recreation Centre the next time they hoop so they could do to him what he had just done to Kyrgios only moments earlier on the tennis court.

Not that Nick’s mother Nill was watching, of course. After feeding her son’s dogs, making dinner and enjoying a glass of red, she sat by the television and watched him walk out on to Centre Court for his maiden grand slam final.

“I just wanted to see his face,” she said. “He looked nervous.”

She watched the coin toss, but that’s as far as she got before turning the television off and going to bed to avoid the anxiety that so often comes on when her son steps on a court. 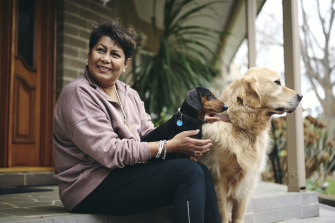 It wasn’t until Nick’s dogs, Quincy and King, began whimpering at around 3am that Nill decided to do a “Nick Kyrgios” Google search to see what had unfolded on the other side of the world.

By that stage Djokovic had been crowned champion once again. Nick was walking around apologising to members of his team, who he took aim at during the match, for letting them down.

With a beer in hand, Kyrgios watched from the windows out the back of the iconic Centre Court as crowds began to disperse. The fortnight of dreams was over.

Like they had done after every match, at the request of Nick’s father George, they headed back to their house at Wimbledon Village for yet another meal of salmon and rice. That was the tradition.

It wasn’t long before photos were being sent home of George posing holding giant bottles of Belvedere inside the Wyld Nightclub in Mayfair.

Nick, still wearing the red Air Jordan hat he rebelliously donned for the post-match trophy presentation with the Duchess of Cambridge, stuck to the Vodka.

Nick’s dad, his sister Halimah, his friend Daniel Horsfall, his girlfriend Costeen Hatzi, his physio Will Maher, his agent Tristan Hay and the crew of Netflix videographers who had been following their every move for behind-the-scenes documentary let their hair down.

They were given a private section inside the lavish nightclub, which when they first arrived before midnight was almost empty. By the end of the night the Wimbledon-themed nightclub at the Hilton was heaving with people, none more popular than the Wimbledon finalist. 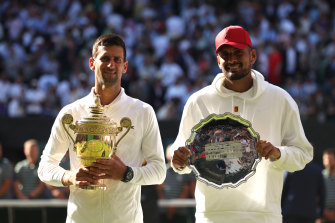 Novak Djokovic was too good for Nick Kyrgios in the Wimbledon Men’s Final.Credit:Getty

George will return home on Tuesdays to be with his wife and meet his first grandchild, who was born and named after him while he was away on tour.

Nick and the rest of his crew will soon board a flight to spend a fortnight inside the tennis star’s luxurious Bahamas mansion.

He is scheduled to face the ACT Magistrates Court on the 2nd of August. It’s unclear whether he has to appear in person.

He plans to play at the Atlanta Open on July 25, before heading to Montreal and Cincinnati to help him prepare for the US Open at the end of August.

It’s unclear what time camp Kyrgios finished celebrating, or if they even have. Although according to the app they filled out to notify drug testers of their location, they should have been back at Wimbledon village by morning. Yeah, right.