Andy Murray is into the final four of the Sydney International but the Scotsman could barely have been more disappointed in the manner in which he reached the semi-final.

Playing his last warm-up event before the Australian Open, where he has been runner-up five times, the former world No.1 was in the ascendancy against David Goffin before the Belgian was forced to retire due to a knee injury after the first set.

“It sucks. The injuries and stuff, as you get older really they can get you down a little bit, but hopefully, he’s ok,” Murray said. “He’s missed the last eight months with injury. I believe he had surgery on the elbow.”

Goffin struggled with a left knee problem early in the match but fought on for the remainder of the first set which Murray won 6-2, before retiring.

For Murray, it was not the way he wanted to win. Having been plagued by injuries over the past five years, Murray was beginning to show the type of on-court movement that propelled him to three Grand Slam titles. Even before Goffin succumbed to injury, he had little response to the 34-year-old.

Murray stormed to a 3-0 lead early in the set as his court mobility showed why there’s hope for the wildcard at next week’s Australian Open. 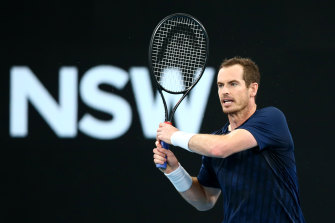 Andy Murray in action at the Sydney International.Credit:Getty

“The movement was what I was most pleased with, maybe made a few more errors than I would have liked today, but I thought I moved well,” Murray said.

Murray will be back on court on Friday to face Reilly Opelka in a semi-final after the American defeated compatriot Brandon Nakashima in straight sets on Thursday.

Top seed Aslan Karatsev was made to secure his spot in the final four when he was pushed to three sets by Italy’s Lorenzo Sonego. Karatsev will face either Maxime Cressy or Daniel Evans in the semis.

In the women’s singles, world No.4 Barbora Krejcikova has continued her strong form ahead of the Australian Open, cruising into the semi-finals of the Sydney International with a 6-2, 6-0 victory over Caroline Garcia on Thursday afternoon. The Tokyo Olympics doubles gold medal winner set-up a clash with Estonia’s Anett Kontaveit on Friday.

“I would like to continue with the good results, so that’s why I was trying to prepare the best way I could,” she said. “I think the most important thing is just to really go and enjoy, and that’s what I’m planning to do. That’s something I’m focusing on.″⁣