Nick Kyrgios says his life “spiralled out of control” before the forced reset of the pandemic enabled him to develop a healthier lifestyle and mend his relationship with his family.

The Canberra tennis prodigy, who has previously admitted to self-harm and suicidal thoughts, told Wide World of Sports that in the years leading up to 2020 he “wasn’t communicating” and turned to drugs and alcohol to deal with his demons.

“It was very serious, to the point of self-harm and it’s not OK,” he said. “I guess I pushed everyone that cared about me away and I wasn’t communicating, and I just shut down real life and I was trying to handle and tackle my problems head-on.

“I was abusing alcohol a lot, drugs and that spiralled out of control. Now I barely drink – I literally have a glass of wine at dinner. That was the initial kind of thing I had to clean up a little bit and then build my relationship back with my family and get into healthier habits like the basics; like diet, getting good sleep, trying to train a little bit more and that was it. I think COVID helped me a lot with that.”

The 27-year-old, who won this year’s Australian Open doubles title alongside compatriot Thanasi Kokkinakis, has long confessed to a love-hate relationship with the sport and says he resented meeting people who “really didn’t care who I was as a human being, rather just a tennis player … the crazy tennis player”.

“I felt I was letting people down all the time,” he said. “I felt worthless to be honest, I didn’t feel comfortable, I hated my life at one stage. 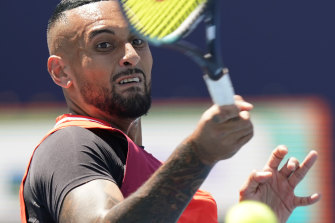 Nick Kyrgios opened up to Nine’s Wide World of Sports.Credit:AP

“I was cutting, burning, just pretty f—ed up shit. It was so dark that I kind of liked it as well, like asking people to do it and stuff. What doesn’t kill you makes you stranger (and stronger). I’m still a bit cooked.”

He credits the Melbourne Park major, along with new girlfriend Costeen Hatzi, for a shift in his mindset. It was in 2020 at the Australian Open that Kyrgios was instrumental in raising tens of thousands for bushfire relief and also went on a march to the fourth round which was only halted by Rafael Nadal. Even then, the current champion and world No.1 needed four sets and two tie-breaks to do so.

“She doesn’t really know anything about tennis,” Kyrgios said of Hatzi. “The only two players she knows is me and Thanasi and that makes tennis quite exciting for her.

“If she knew 95 per cent of the tour, she’d probably blow her brains out. I’m actually at a point in my life I’d like to start settling down a bit. I’ve had a lot of fun in my life.”