Wimbledon: Crowds arrive at ahead of women’s singles final

John McEnroe and Sue Barker got into a discussion over Wimbledon finalist Elene Rybakina’s nationality during the BBC’s coverage of the women’s final on Saturday. The Moscow-born player switched allegiances to Kazakhstan in 2018 and was able to compete at this year’s tournament. Wimbledon banned Russian and Belarussian players from this year’s event following Vladimir Putin’s invasion of Ukraine, and had their ranking points stripped as punishment.

McEnroe and Barker discussed whether Rybakina should be able to compete, despite making the switch to Kazakhstan four years before the ban was enforced. “She is obviously a huge hitter and hits the ball great,” McEnroe said during the BBC’s Wimbledon coverage. “I just think it’s weird because of this whole thing. I don’t mean to get into politics here but she is Russian, right? It is sort of strange because of this whole ordeal of not allowing the Russians to play.”

Barker replied: “But there are a lot of players who switch nationalities, we had one here ourselves, Cam Norrie from Canada to Great Britain. She played the Olympics and the Billie Jean Cup as well for Kazakhstan.”

McEnroe conceded and praised Barker, who is retiring from broadcasting after Sunday’s final, and urged her to continue working. “That’s why you have been so good for 30 years,” the American said. “Unbelievable, just one more please! I know what you are saying, and you know what I am saying.”

JUST IN: Henman teases Cash after ‘four glasses of wine’ before BBC duty 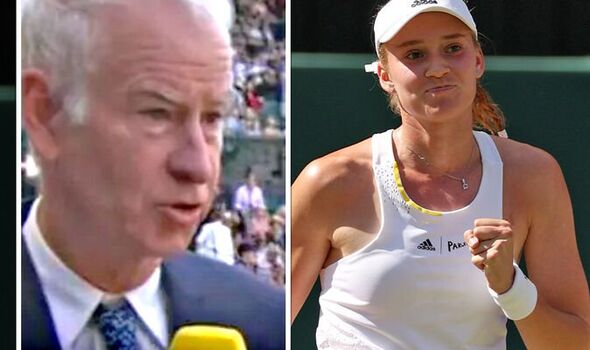 “I know, I know,” former French Open winner Barker said. “But it hasn’t been easy for her in the press conferences because that’s been said to her every time.” McEnroe replied: “I would imagine, her parents live in Moscow!”

Tracy Austin, alongside McEnroe and Barker, explained Rybakina’s switch. “The good thing is that she has represented Kazakhstan for four years now,” Austin said. “So it wasn’t just last year. I think she did it when she was young because she needed the funding, really she was one of the top juniors in the world but she didn’t have the funding to travel, her dad wanted her to go to college.” 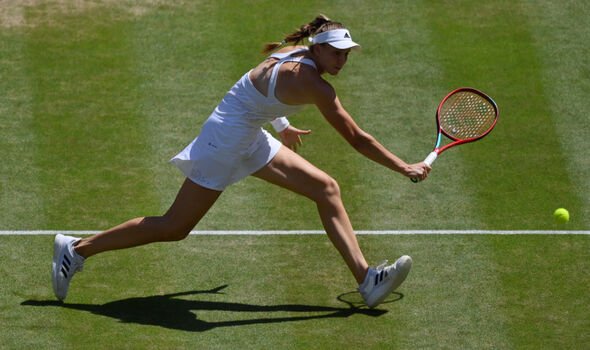 After defeating former Wimbledon champion Simona Halep in straight sets to reach the final, several Russian websites claimed her success and caused more controversy. Russian website Championat had a headline that read: “This is our Lena – a native of Moscow in the Wimbledon final!”

Rybakina, who before the tournament claimed she would be surprised if she made it to the second week, was previously asked if she felt more Russian or Kazakh.

“It’s [a] tough question,” Rybakina said. “I was born in Russia, but of course I am representing Kazakhstan. I answer these questions yesterday. As I said yesterday, I can repeat it now: I’m playing already for Kazakhstan for a long time.”