American tennis icon John McEnroe was lost for words at just how Andy Murray let slip a 5-0 lead in the third set with the match all-but wrapped up at that point. The former world No 1 was competing in the men’s singles at Wimbledon for the first time since 2017.

He entered the court to rapturous appload from the Centre Court crowd and didn’t disappoint with some impressive tennis as he rolled back the years.

Murray quickly moved into a 2-0 lead and Basilashvili looked down and out heading into the third set.

The three-time Grand Slam champion was riding high and raced to a 5-0 lead, one game away from progressing through to the second round.

But Basilashvili suddenly found some momentum as Murray struggled to see out the match.

JUST IN: Scientists who worked on Oxford vaccine given standing ovation 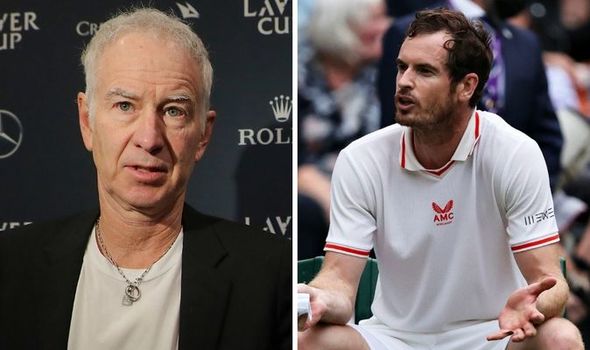 And what ensued left McEnroe stunned as Murray lost seven straight games, adding a fourth set to the match.

“I don’t believe what I just saw,” McEnroe said on BBC.

“I’m gonna look at the glass half full and say that the guy started to battle again but he looked like he’d quit a few games earlier.

“The next thing you know he gets a break back, then a second break, then a third break… he lost his serve four times in a row and he hadn’t even lost his serve up to that point.

“What in god’s name did we just say in here,”

“Could someone explain to me what just happened.”

There was then close to 20 minutes delay as the roof was closed on Centre Court with the light fading.