Paula Badosa couldn’t work it out. She was hitting big, heavy serves and the ball just seemed to be coming back at her with interest.

What happened to her was Madison Keys. The big-slugging American was pounding back returns, making Badosa think the problem was her serve. It wasn’t, it was Keys. The American cleaned up the Spanish eighth seed in straight sets 6-3, 6-1. 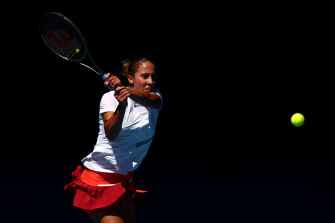 ”What can I say? Sometimes I was serving 180. I had to look [twice] what the serve said because I didn’t understand how a winner came back that fast. I thought I was serving bad. Then I saw it was her game, that she was playing very, very good,” Badosa said.

“Madison, she’s like that. When she has confidence, she’s very dangerous. She’s playing a lot of matches, feeling the ball very well. As I said before playing her, she has a very good serve and very good forehand. I got to see it today.”

For a long time Keys didn’t know she was a big hitter, she just thought that was how you played. 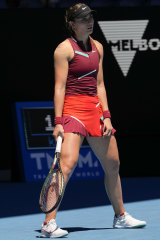 “Growing up I didn’t understand the concept of tennis, but my grandpa is a massive baseball fan, so I would try to hit home runs, which I think really makes my tennis game make a lot more sense,” she explained later with a smile.

“I don’t even really think of it as far as power. I think today I was really focused on just trying to get the ball kind of deep and at her feet just because she is kind of a big first-strike tennis player. I knew if I let her get that first ball the way that she wanted, I was going to be in trouble.

“I just honestly kind of think out in front and swing at it.”

Last year she missed the Australian Open and was playing catch up all year afterwards, living in bubbles and never feeling quite right.

“I felt like I was doing a lot of the right things last year, I was doing my best, and it just wasn’t happening,” she said.

“My biggest mindset change is just trying to enjoy tennis, take some of that just internal pressure that I was putting on myself. It was honestly freezing me. I felt like I couldn’t play at all.

″⁣Just taking that away and putting tennis into perspective: that it’s a sport, something that when I was little I enjoyed doing and loved doing it. I was letting it become this dark cloud over me. Just trying to push all of that away and leave that behind last year and start fresh this year.”

It was a big day for the Americans against higher-ranked players, with Greek fifth seed Maria Sakkari also beaten by American Jess Pegula 7-6 (7-0), 6-3. 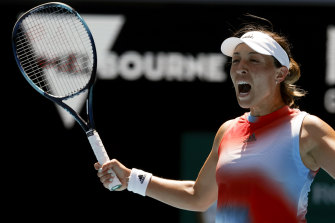 After Pegula won the tie-breaker the drop in confidence from Sakkari was palpable.

The American, seeded 21, has now beaten eight top-10 players in her career. All of those wins have come since the start of last season.

She made the quarter-finals here last year and has now matched that performance with her strong win over Sakkari.

Watch all the action from Melbourne Park on Nine, 9Gem, and 9Now.