Tennis has narrowed the gender pay gap as measured by prizemoney. Male and female grand slam competitors are paid the same. While there is still a gap of around 15 per cent in week-to-week prizemoney on the men’s and women’s tours, tennis has done better than nearly every other sport to eliminate gender pay inequality, in contrast with the inequalities of the real world. 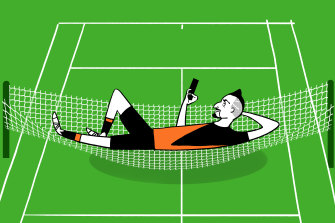 It’s a world that Kyrgios understands well. Paul McNamee opined that Kyrgios’s showbiz turn with Venus Williams in the mixed doubles at Wimbledon contributed to his tournament-ending injury when he played singles the next day. McNamee argued that if Kyrgios wants to be taken seriously as a tennis player, he should drop the sideshow acts and focus on his work on the main stage.

He’s probably right, but Kyrgios is laughing his way straight to the bank (in the Bahamas, bypassing the tax office). Star turns such as his pairing with Williams got people talking, got people tweeting, got people sharing images, got people generating all the chitchat that Kyrgios has been able to parlay into economic activity. He seems to be following the Greg Norman example of using wealth as a hedge against sporting disappointment. Norman, with so many near-misses, compensated by becoming as rich as Croesus.

To be fair, Norman was also a sportsman of great substance, a world No.1 for more than five years. But the world has changed since then. Norman did it with property development and merchandising. Now, being talked about is a currency that an underachieving sportsman can deal in naturally. 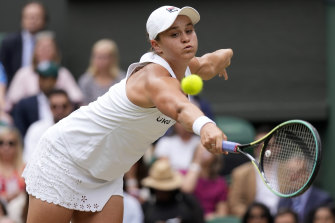 Barty will face Karolina Pliskova in the Wimbledon final on Saturday night AEST.Credit:AP

Barty, meanwhile, slogs away in the tennis world, uncontroversial, unpolarising, ungoatlike, as un-celebritylike as a superstar can be. When she took time off tennis, she played cricket and golf. When Kyrgios took time off tennis, he became a spokesman for bushfire relief and for opinions about Novak Djokovic. Barty played professional cricket for a bit and was paid women’s wages, which presumably reminded her of the fairer deal she would get back in tennis.

It’s not that Barty is short of a quid. Her net worth is estimated to be double that of Kyrgios, but Barty’s has been fed primarily by tennis prizemoney. When it comes to the endorsement incomes of all tennis players, the gender gap is as wide as ever. Roger Federer, the highest-earning player last year, made some $US90 million in endorsements, more than triple the off-court income of tennis’s wealthiest women, Serena Williams and Naomi Osaka. Whether goat or GOAT, a male tennis player still enjoys the inequality of valuation enjoyed by a male in most other walks of life.

The cognitive dissonance could not be on clearer display than it has been this week.

On Saturday night, Barty will carry the hopes of millions when she tries to win her first Wimbledon title. And that’s a guarantee: she will try. Whatever she does, she will be loved and admired for it. She’s as genuine a personality as she is a tennis player. Meanwhile, Kyrgios will be getting likes on social media in his tax haven and raking it in. If he puts out something outrageous on social media at the same time as the women’s final, he could generate enough noise to drown it out.

Whose fault is this? Ours, obviously: yours and mine. So many of us extol the purity of sport, the beauty of the contest, the authenticity of excellence that is proven on the scoreboard, the emphatic and singular display of skill such as Barty put on in her semi-final victory over Angelique Kerber. This is what we all say we want more of, and what excites and interests us most.

But economically, our track record shows that we reward flim-flam. More comments, more outrage, more numbers – when it’s a competition between pure sport and some celebrity making a spectacle of himself, the flim-flam man knows where we go and whole industries (think they) know how to turn our worst tendencies to profit. We in the media are the accomplices, eagerly amplifying the latest stink while downplaying the actual sport that we claim to love. This column, by focusing on the pay gap rather than purely tennis, pleads guilty to same.

In a perfect world, we would talk about sport and nothing but sport. In that perfect world, Ash Barty would have to live in the Bahamas (except she wouldn’t). In that perfect world, chatter and opinion and dispute would be reserved for heated arguments over serving and receiving serve, volleying versus hitting from the baseline. In that world, the woman would be as famous and as highly valued as the man. But we never live up to those ideas of perfection, and the degree to which we fall short is measured by the rewards we hand out.

Tags: a, dichotomy, Kyrgios-Barty, Sad
You may also like
Latest Posts