Nick Kyrgios, who is battling COVID ahead of the year’s first Grand Slam, said he was “embarrassed” to be an Australian athlete after the Novak Djokovic visa debacle and blamed media for what he considered to be divisive coverage of the matter.

Djokovic, the Serbian world No.1 and nine-time Australian Open champion, is at the centre of one of the biggest stories in world sport after he was threatened with deportation after his visa was cancelled by Australian border officials.

That was overturned on appeal, clearing the way for Djokovic to play in Melbourne next week, but the final say now rests with the Federal Government and its immigration minister Alex Hawke, who could yet show the door to the 20-time Grand Slam winner.

Kyrgios has criticised Djokovic in the past, most notably when the Serb organised his ‘Adria Tour’ events at the height of the pandemic in 2020, but the Australian has been sympathetic to the treatment of Djokovic, who was detained in a hotel until he was cleared at Monday’s hearing.

He added more layers to that on his social media channels on Tuesday, clearly hoping Djokovic would now be free to compete in Australia and pursue what would be a record 21st grand slam title, one more than Roger Federer and Rafael Nadal.

“We know that the media like to create shit-storms, with my story and everything going on with Novak,” Kyrgios said. “I feel quite embarrassed as an Australian athlete who’s seen what this guy has done for us and for the sport. I just don’t think it’s right how we’re handling it, but the media loves to do that, loves to divide.” 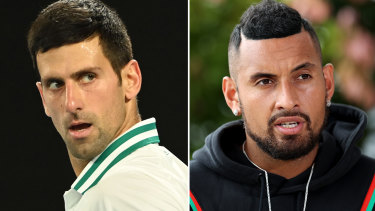 Kyrgios has other things on his mind, chiefly his health. He said he felt in reasonable shape on Tuesday after he withdrew from the Sydney Tennis Classic in the wake of a positive test.

It puts him in genuine doubt for the Open next week but Kyrgios said he would be doing all he could to ensure his participation at Melbourne Park.

“I actually don’t feel too bad at the moment and I’m taking all necessary precautions,” he said. “Obviously not ideal a week out of the Aus Open, but I’m going to do everything in my power to feel OK and get out there and hopefully give you all a show.

“I just don’t want this to take away from the Australian summer of tennis. We’ve had a lot of great results, a lot of other Aussies are doing really well.”