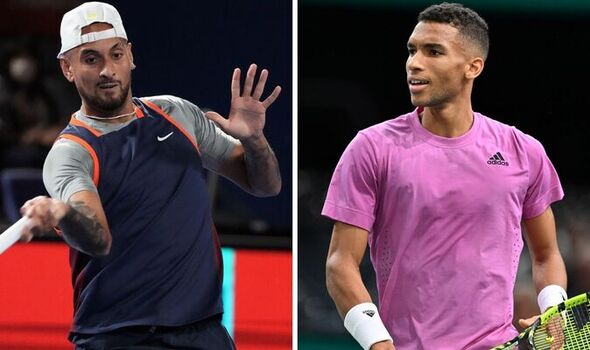 Nick Kyrgios has taken to social media to pose a question following Felix Auger-Aliassime’s recent success. The Canadian won three titles over the last three weeks and is now bidding to become the first man to win four in four weeks since 1981 after making the semi-finals of the Paris Masters.

Auger-Aliassime has hit a purple patch at the end of the 2022 season, finding himself on a 16-match winning streak after reaching the last four in Paris-Bercy with a 6-1 6-4 win over Frances Tiafoe. The 22-year-old has lifted three titles in three straight weeks, prompting many to joke about whether he will ever lose a match again.

And it appears Kyrgios is wondering the same thing amid the world No 8’s run at the final Masters 1000 of the year, as he took to Twitter to ask: “When is FAA gonna lose,” adding a laughing-crying emoji. The Canadian has now gone more than a month without suffering defeat, with his last loss coming to Roberto Bautista Agut in the opening round of the Astana Open on October 3.

Prior to that, Auger-Aliassime had also earned two very impressive victories at team tournaments. The four-time title winner beat Carlos Alcaraz in what was the Spaniard’s first match since becoming world No 1 and winning the US Open, downing him at the Davis Cup.

And Auger-Aliassime also defeated Novak Djokovic in straight sets at the Laver Cup just days later, helping Team World win the tournament for the first time in its five-year history. The 22-year-old already has a second win over No 1 Alcaraz under his belt since the teenager became world No 1, defeating him in last week’s Basel semi-final.

The Canadian has been rewarded for his efforts as he also qualified for the ATP Finals for the first time in his career. There were two more spots in the season-ending championships up for grabs this week heading into the Paris Masters, and they were won by Auger-Aliassime and Andrey Rublev following defeats for Taylor Fritz and Hubert Hurkacz.

The young star recently fired an ominous warning to his rivals as he admitted he was just getting started and could only get better. “I’ve always believed I could play at the highest level,” Auger-Aliassime said after beating Mikael Ymer on Wednesday.

“I still consider it the beginning of my career and that I can do better and go higher.” The world No 8 also took plenty of confidence from his previous wins over Alcaraz and Djokovic, adding: “After the US Open, I felt boosted by the collective training session with the Davis Cup team, I played a good match versus Carlos. After that, the Laver Cup was a nice collective emotion too. I don’t know why but I took will and energy from there. And the motivation to play good until the end of the season.”