Sports stars and celebrities from Michael Phelps to Michelle Obama have paid tribute to 23-time grand slam champion Serena Williams, whom many have called the greatest of all time.

A career spanning nearly three decades came to a close on Saturday, as Australian Ajla Tomljanovic took out a final set and claimed victory in what was likely Williams’ final professional match. 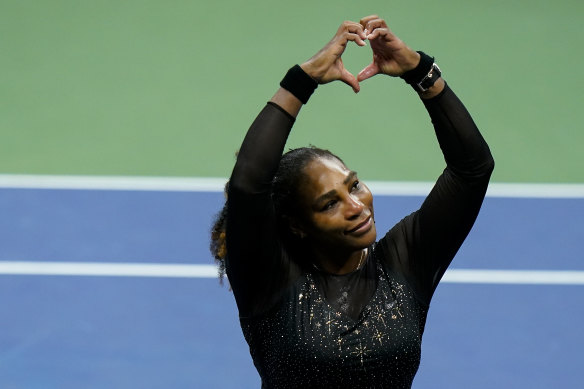 Serena Williams is being touted as the greatest of all time.Credit:AP

But for sporting legends and icons across the world, Williams will continue to be remembered and watched for her determination, strength and career in and beyond tennis.

American former competitive swimmer Michael Phelps said Williams was an inspiration to all and had empowered the next generation. “She simply doesn’t quit. On or off the court,” Phelps said. “She’s a great example to us all.”

Those sentiments were echoed by American professional golfer Tiger Woods, who referred to Williams as his “little sis” and said she was “the greatest on and off the court”.

The goat emoji was prevalent across Twitter as legends across sporting pursuits, including basketballer Breanna Stewart and American football quarterback Patrick Mahomes, took to the platform to thank Williams.

WNBA basketballer Diamond DeShields thanked Williams with her own story. “From a little black girl that grew up playing tennis, it was YOU who made me feel comfortable in the sport,” she said.

Fellow tennis players also poured in with their admiration for Williams, including Carlos Alcaraz, Billie Jean King and Ons Jabeur. King wrote that while Williams’ incredible career made its mark on tennis history, “her greatest contributions may be yet to come”.

Former NBA player Magic Johnson hinted at the continued impact the tennis champion may have in the business realm. “I remember when we talked about you becoming an entrepreneur … Now, I look forward to you growing in business.”

Williams has her own venture capital firm, Serena Ventures, which has a portfolio of about 60 companies, and an eponymous fashion brand called S by Serena.

Microsoft co-founder Bill Gates said Williams had broken down double standards and that he would continue to watch her build her career outside of tennis.

“[Williams] will be leaving behind an extraordinary tennis career that challenged the double standard between male and female players,” he said. “I look forward to watching her continue building her amazing legacy off the court.”

Meanwhile, former first lady of the United States Michelle Obama said she was proud of Williams and how far she had come.

“How lucky were we to be able to watch a young girl from Compton grow up to become one of the greatest athletes of all time,” Obama said. “I’m proud of you, my friend—and I can’t wait to see the lives you continue to transform with your talents.”