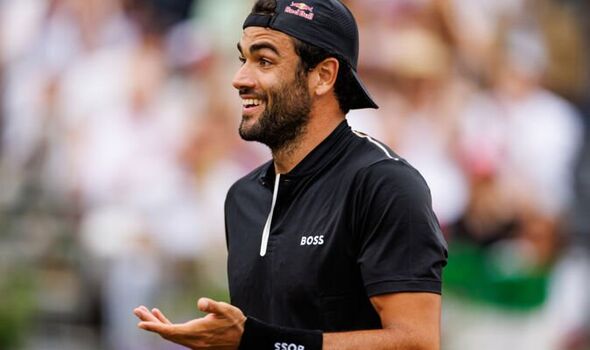 Defending champion Matteo Berrettini booked his place in today’s Queen’s Club final against Filip Krajinovic — then received a playful marriage proposal from a smitten fan. Having beaten Holland’s Botic van de Zandschulp 6-4, 6-3 in 90 rain-affected minutes, the 26-year-old was conducting a court-side TV interview when a fan yelled out the offer.

“Let me think about it,” said the Italian heartthrob, laughing, before turning his thoughts back to the game he’d just played.

“It feels unbelievable,” he added, “I’m really happy. It was windy again but I played my best match of the week and I’m really looking forward to the final.”

He said: “I didn’t know that. It feels nice. Obviously I can’t compare myself to those three players, they made history in our sport, but I’m trying to learn from them and hopefully one day I’m going to beat them.”

The two powerful servers started their match well and Van de Zandschulp saved eight break points in a game that rumbled on and on at 3-2 before handing world No.10 Berretti a break with a double fault.

The Dutchman broke back but Berretti kicked on again to win the first set.

Van de Zandschulp was frustrated when the match, which had been delayed by rain at the start, was halted by another downpour at 3-2 in the second set with him 30-40 down on serve.

And when the pair returned, Berrettini made short work of things to set up his clash with Krajinovic, who beat two-time Queen’s champion Marin Cilic 6-3, 6-3.

The Serbian, for whom today’s outing will be a fifth career final, said: “It’s an unbelievable feeling, I just can’t believe I’m in the final.

“Before this tournament, I’d never won a match on grass and now I’m in the final it’s a dream come true.

“To be honest, I don’t like to play on grass and every year I find a way to skip the tournaments, just coming to Wimbledon and losing the first round.

“But maybe it will change, let’s see how it’s going to go.

“Matteo is an unbelievable player. I’m just going to go and enjoy it, I have nothing to lose. I will of course give my best.”