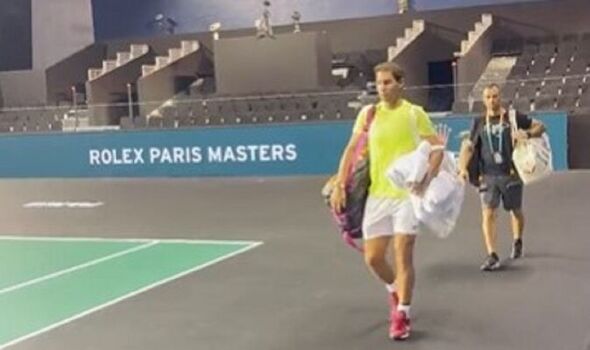 Rafael Nadal has already started practising at the Paris Masters four days before the tournament begins. The world No 2 is making his return at the final Masters 1000 tournament of the year after recovering from injury and welcoming his first child with wife Mery Perello.

Nadal has not officially competed since the US Open, where he crashed out to Frances Tiafoe in the fourth round and confessed that he didn’t know when he’d play again as he continued his recovery from an abdominal tear he sustained at Wimbledon. The Spaniard appeared at the Laver Cup to join Roger Federer for the Swiss star’s retirement but left the following day to return to his pregnant wife.

The 22-time Grand Slam winner has since welcomed his first child with Perello, and his coach recently confirmed that he would be back in action for the last two events of the season – the Paris Masters and the ATP Finals. And it appears Nadal is raring to go as he was spotted on the Centre Court at Paris-Bercy to get in some practise ahead of his return.

The Paris Masters is one of the few big events on the tour that the 36-year-old has never won, as is the ATP Finals. And Nadal could have a good chance at breaking his duck at both events as he will be fresher than his rivals after almost two months away from competition.

JUST IN: Carlos Alcaraz snubs Nick Kyrgios for five players to be his rivals

The Spaniard’s coach Carlos Moya also believed that his charge was in with a shot at lifting the trophies in Paris and Turin for the first time, telling IB3: “Before arriving in Turin, you have to play matches in Paris, which are similar. He has not been able to win it, but he has achieved good results and has come close to doing so on several occasions.”

And the last two tournaments of the season will also give Nadal a chance to become the year-end No 1 for a sixth time, which would also see him break the record to become the oldest season-ending No 1 in ATP history, breaking the record Novak Djokovic set last year. Nadal’s countryman Carlos Alcaraz currently sits atop the rankings as he achieved a contrasting record – becoming the youngest man ever to reach No 1.

Djokovic himself believes that Nadal will bid to catch the 19-year-old for the year-end No 1 spot, recently telling Sportal: “I am sure that Nadal will try to dethrone him until the end of the year, he has got a chance.”

The current world No 2 has no more points to defend for the rest of the year after ending his 2021 season early. He is currently 920 points behind Alcaraz and can win a maximum of 2,500 across the two tournaments, while the US Open champion is defending 270 points over the next two weeks in Basel and Paris.