The Spaniard was in an uncompromising mood, taking his 13th French Open title in straight sets 6-0, 6-2, 7-5 against the world No.1. 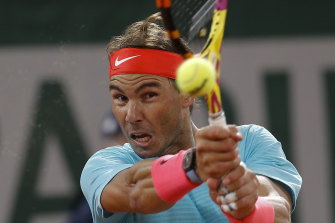 Rafael Nadal en route to victory in the French Open final on Sunday.Credit:AP

Nadal was the early aggressor as he choked Djokovic to win the opening set in brutal fashion having made only two unforced errors. He then kept a firm grip on a subdued Djokovic in the second set under the roof of court Philippe Chatrier.

Djokovic, who was looking to win his 18th grand slam title, rebelled in the third set, breaking back for 3-3, only to drop serve on a double fault in the 11th game before Nadal went on to bag his 100th victory at Roland Garros with an ace.

Tags: Djokovic, French, in, Nadal, stuns
You may also like
Latest Posts

Usyk vs Chisora: All the ways to watch Oleksandr Usyk against Derek Chisora
Recent Posts
This website uses cookies to improve your user experience and to provide you with advertisements that are relevant to your interests. By continuing to browse the site you are agreeing to our use of cookies.Ok