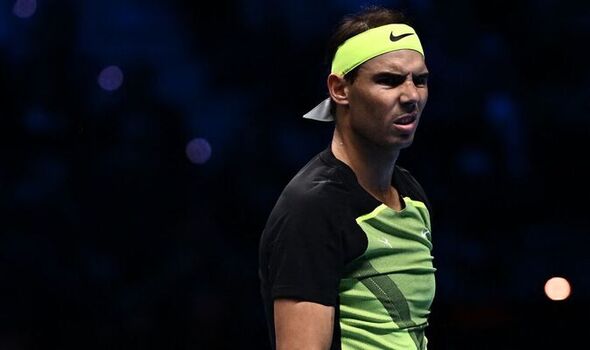 Rafael Nadal has been warned that Felix Auger-Aliassime’s first serve will cause “murder” in their ATP Finals clash as two tennis legends confessed that the Canadian was the favourite to beat the top seed. Nadal goes into the match having suffered three-consecutive losses for the first time in 13 years while the 22-year-old recently won three titles in the space of three weeks.

Nadal and Auger-Aliassime will face off in their second round-robin match at the ATP Finals on Tuesday after both losing their opening matches. Nadal’s 7-6(3) 6-1 defeat to Taylor Fritz on Sunday marked just his seventh match since Wimbledon after tearing his abdomen twice and was his third-successive loss after defeats at the Paris Masters and US Open, marking the first time since 2009 that he has lost three straight matches.

And the 36-year-old is being tipped to lose four on the bounce as tennis legends Andy Roddick and Jim Courier said Auger-Aliassime was the favourite going into the match despite a shaky start in his ATP Finals debut against Casper Ruud, where he lost 7-6(4) 6-4.  “I’m going to be fascinated to see what kind of tennis Nadal brings to the table,” Courier told Tennis Channel.

“He was a little bit flummoxed honestly in the last couple of matches against Tommy Paul back in Paris and against Taylor Fritz he went away meekly in the second set, we don’t often see that for him. I think he’s trying to figure out what is going on.” And the four-time Grand Slam champion threw his weight behind Auger-Aliassime as he warned Nadal that the 22-year-old had a “murder” tactic in his arson.

JUST IN: Djokovic ‘aware’ of Federer record and vows to leave mark on ATP Final

He continued: “And what what has been going on this Fall is that Felix Auger-Aliassime’s first serve has been murder. It’s been Roddick-esque and he has been winning and winning and winning except for his first round here. I like Felix in this one and I wouldn’t have said so otherwise but the later results point in that direction.”

Meanwhile Roddick himself agreed that the world No 6 was the favourite going into the match despite having a losing record against Nadal, with the Spaniard winning both of their two previous meetings. “Form matters,” the former world No 1 said.

“You can have the lifetime statistics and those create a legacy but what’s happened the last three months dictates who’s a favourite. I agree with Jim, it’s Rafa’s least favourite time of the year, this court surface does not really support him.” And Nadal’s clash with Auger-Aliassime will be extra interesting with the Spaniard’s uncle and former coach Toni Nadal now working with the Canadian.

When the pair faced off at the French Open earlier this year, Toni said he would not be picking sides and would watch from afar instead of sitting in either player’s box. But this time around he is backing his new charge as he confirmed that he would be sitting in the Auger-Aliassime camp, against his nephew.