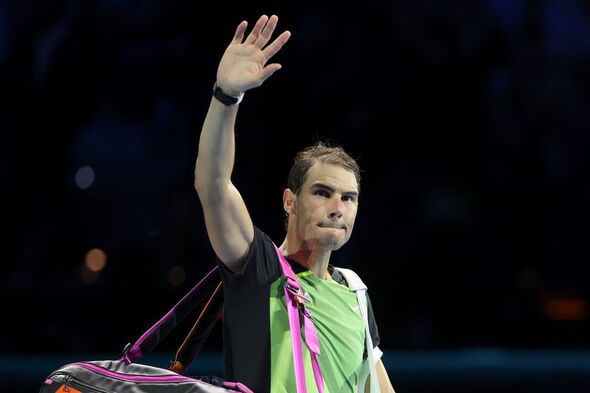 Wounded Rafael Nadal will be out for ‘revenge’ in his final ATP Finals match, his opponent Casper Ruud claims. Norwegian Ruud officially sealed Nadal’s fate on Tuesday by claiming the one set required against Taylor Fritz to knock the legendary Spaniard out of the season finale.

Nadal crashed out in the group stages after a 6-3 6-4 defeat to the in-form Felix Auger-Aliassime in Turin. He had previously lost his opening round tie against American Fritz and has now been defeated in four consecutive matches stretching back to the US Open in September.

The 22-time Grand Slam champion’s exit means his compatriot Carlos Alcaraz will end the season as the youngest ever year-end men’s world no.1, despite his absence from the tournament through injury.

And Nadal now has to face the on-song Ruud on Thursday, with the world no.4 top in the group after edging out Fritz. Nadal will be keen to end his season on a high after a dismal return to competitive action, and Ruud is convinced that his childhood idol wants ‘revenge’ for his poor ATP Finals showing.

“You can never feel comfortable playing against Rafa, no matter what form he is in or what shape,” Ruud admitted. “I mean, he’s had two tough losses here. Yeah, the match on Thursday is going to be quite different conditions than when we played in Roland Garros this year, that’s for sure.

“It’s faster. It’s not best-of-five. It’s on hard court. Everything is different. But you can never count Rafa out. He has proven that many times. Every match here is important. You play for points and the ranking. I’m sure he would like to seek some sort of revenge for his two losses and finish his ATP season in a good way.

“I will try to keep it rolling for the semi-final. It would be obviously a dream feeling to move out of the group with three wins. But the next one is going to be probably the toughest match in my career, due to the fact that he’s also been my biggest idol for all my life. It’s always going to be a little bit extra special to play against him.”

Ruud’s comments came after Nadal made the impassioned claim that he would ‘die’ to return to the elite level of tennis that has seen him become an all-time great. “I mean, I don’t think I forget how to play tennis, how to be strong enough mentally,” Nadal said.

“I just need to recover all these positive feelings and all this confidence and all this strong mentality that I need to be at the level that I want to be. I don’t know if I am going to reach that level again. But what I don’t have any doubt [about], is that I’m going to die for it.”