‘She’s drunk out of her mind’: Nick Kyrgios FUMES at Wimbledon umpire and demands an intoxicated fan is thrown out of the front row during the final… as fiery Australian points her out as ‘the one who looks like she’s had 700 drinks bro’

Nick Kyrgios’ first ever Grand Slam final was never going to pass by without an infamous outburst from the Australian.

After taking the first set against Novak Djokovic in the Wimbledon showpiece, Kyrgios dropped the second set and then let his anger get the better of him in the third.

He was particularly furious with one fan on Centre Court, who he claimed was putting him off. 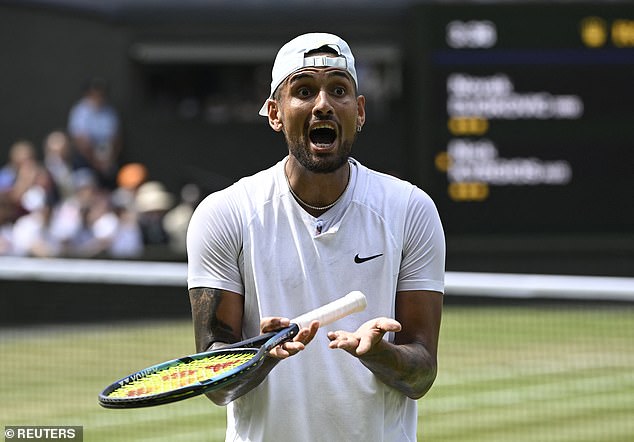 ‘She’s distracting me when I’m serving in a Wimbledon final,’ he fumed at the umpire about a fan. ‘There’s no other bigger occasion, you didn’t believe me and then she did it again. It nearly cost me the game.

‘Why is she still here? She’s drunk out of her mind and speaking to me in the middle of a game. What’s acceptable?

‘Kick her out. I know exactly which one it is. The one who looks like she’s had about 700 drinks bro. ‘