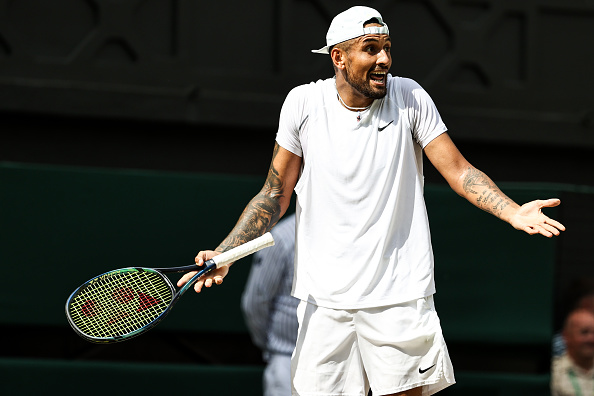 Nick Kyrgios insists the ‘drunk’ fan who disrupted him during the Wimbledon final didn’t cost him in the championship.

The Australian took the opening set in his maiden Grand Slam final but fell short against Novak Djokovic who recovered to seal his fourth successive title at SW19.

During the fifth game of the third set, a woman was heard heckling the world no40 as he attempted to serve, with a fuming Kyrgios demanding she be removed.

‘She’s drunk out of her mind in the first row speaking to me in the middle of a game. How is that acceptable?’ Kyrgios said before identifying the woman as ‘the one who looks like she has had about 700 drinks’.

Discussing the incident in his post-match press conference, Kyrgios insisted he was fully aware the fan was ‘absolutely smashed;, adding it was the right decision to have her removed.

‘I wouldn’t say she cost me the game,’ Kyrgios said. ‘I’m playing the Wimbledon final against probably one of the best players of all time.

‘I don’t need someone absolutely smashed talking to me point in, point out. Do you know what I mean?

‘I’m all for having a great time. Like speaking between first and second serves to me, you know. I mean, look, I’ve been on a couple nights out in my life. And I knew that she had too many.

‘I feel like, I told the umpire, I was like, ‘She’s speaking to me a lot, and she’s drunk. What are you going to do about it?’ He was like, ‘I didn’t know she was drunk’.

‘Then she continued. And, not just me. I feel like that’s when you got to maybe give her a water or take her out.’