Wimbledon is facing pressure to rethink its strict dress code after being accused of “turning a blind eye” to the anxiety female players face at having to compete in traditional whites while on their periods.

A protest will be staged on Saturday outside the main gates of the All England Club – coinciding with the day of the ladies’ singles final – by a group of activists who say the “archaic” clothing tradition is disadvantageous to women players.

The protestors will wear skirts with a “red blood” skort underlayer, inspired by Tatiana Golovin, the former Russian-born French player who sparked a flurry of headlines when she wore red shorts under her skirt at Wimbledon in 2007. The skirts are designed to highlight the impracticality of wearing white clothing for players who menstruate and follows a campaign launched this week calling on Wimbledon to “Address The Dress Code”.

“These archaic rules were written years ago by men and they’ve got stricter and stricter over the years. It’s about time they were rewritten with menstruation in mind,” said Gabriella Holmes, 26, a keen recreational tennis player and one of the co-founders of the campaign.

“We’re not asking for drastic changes. Maybe the Wimbledon board can sit down and make a couple [of] amendments that consider the fact that women are competing on their period and it’s adding to their pressure when they’re performing at this level.”

Earlier this week, British doubles player Alicia Barnett opened up about the stress of having to compete in white on her period. 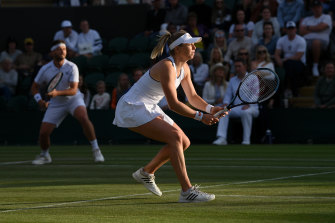 “I do think some traditions could be changed,” she said. “I, for one, am a massive advocate for women’s rights and I think having this discussion is just amazing.”

The campaign was launched using a photoshopped version of the provocative “Tennis Girl” photo, which shows a female player without underwear, taken by British photographer Martin Elliott in 1976. The adapted image shows a woman posing in “Wimbledon whites” to reveal a blood stain.

“The idea was to turn this original image that objectifies women, into one that draws attention to the struggles real ‘tennis girls’ face when doing sports on their period,” said Holly Gordon, 28, co-founder of the campaign.

A Wimbledon spokesperson said: “Prioritising women’s health and supporting players based on their individual needs is very important to us, and we are in discussions with the WTA, with manufacturers and with the medical teams about the ways in which we can do that. It is an issue we have got to think carefully about.”

Watch all the action from Wimbledon ad-free, live & on demand on Stan Sport, with matches streaming in 4K UHD. Coverage of select matches commences on 9GEM from 9.30pm AEST each night