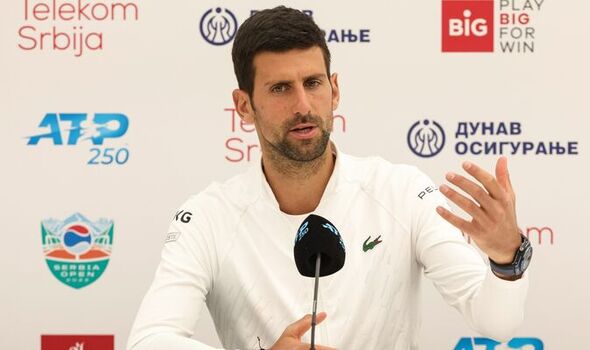 Novak Djokovic has revealed his desire to buy back the licence for the Serbia Open while competing in his home tournament this week. The world No 1’s family owned the licence for three years and have recently leased it back, with the ATP 250 event held at the Serb’s Novak Tennis Centre in Belgrade with his brother Djordje as the tournament director. Djokovic is now hoping the event will get a boost and be worth more ranking points in coming years.

Djokovic is playing just his third tournament of the year at the Serbia Open after going 2-2 in wins and losses so far this season, and is hoping to get some more matches under his belt in a home environment at his Novak Tennis Centre. But there are also other things on the top seed’s mind this week, as he shared his plans for his family to repurchase the tournament’s licence after letting it go 10 years ago.

The Djokovic family owned the licence from 2009 to 2012, and last year the ATP 250 event finally returned to Serbia after the family leased it back following financial struggles for tour events during the pandemic. In 2021 there were two editions of the tournament held – Belgrade 1 and Belgrade 2 – with the event resuming as a normal one week-only affair this year.

As the 20-time Major champion set his sights on repurchasing the licence to keep tennis in his home city of Belgrade, he also revealed he was hoping the event would receive a boost and be upgraded to ATP 500 status. “In terms of the category upgrades. First of all, we are not the owners of this licence, we are leasing the licence,” the 34-year-old said ahead of his opening match against Laslo Djere.

JUST IN: Wimbledon confirm ban on Russian players as Medvedev to miss out

“We do have the intention to propose and make an agreement with the current owners to purchase the licence; and then, when that’s done, we can think and talk about possible upgrades.” The 86-time title winner revealed that the ATP had disclosed a slot in the calendar for an ATP 500 tournament in the same week that the Serbia Open runs, and was hoping to capitalise on that gap to upgrade the tournament if his family bought the licence.

“There is a possibility in this week [of the tennis calendar]. I know because the ATP management has communicated that to me and to the players a few years ago,” he explained. “But nothing yet is being concretely done on that behalf, so we’ll have to wait and see.”

While Djokovic is also involved in the organisation of the tournament with its location in his Tennis Centre and his brother in charge, the world No 1 was also keeping his upcoming French Open title defence in his list of priorities as he looked to get more matches under his belt in Belgrade following an opening-round loss in Monte Carlo last week.

“Roland Garros is the quintessential clay-court tournament and I’m partly already there in my thoughts, in terms of preparation and everything I’m doing at the moment to get there as ready as I can be,” Djokovic said ahead of the tournament. The 20-time Major champion has been unable to play many events so far this season as a result of his unvaccinated status and was hoping to make up for lost time in Belgrade.

“I need match practice and this is the surface (clay) that requires a lot of time spent on the court during training sessions, and even more during matches,” he admitted. “I hope to play more matches in Belgrade than in Monte Carlo.”

The world No 1 will finally be able to build some momentum with a return to a normal schedule in the clay court season, as he is set to play Madrid and Rome after his Serbia Open campaign before going on to try and defend his French Open title.