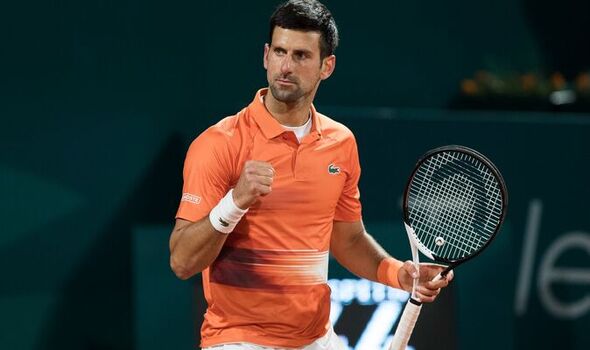 Novak Djokovic was forced to come back from a set and a break down for a second successive match in Belgrade. The top seed narrowly escaped defeat againt countryman Miomir Kecmanovic to reach the semi-finals of the Serbia Open, winning through 4-6 6-3 6-3 in two hours and 18 minutes.

Djokovic had made it to the quarter-finals after surviving a scare in his opening match, where he was forced to come from a set and a break down to beat Laslo Djere 2-6 7-6(6) 7-6(4). The world No 1 seemed up for it against Kecmanovic as he won the coin toss and elected to serve, managing to open with a service hold after getting broken in his opening game on Wednesday.

But the problems started to emerge for the 20-time Grand Slam champion once again as he fired back-to-back drop shot in a poor next service game, getting broken by the world No 38. He was then forced to come back from 0-40 down in the following service game, stopping himself from going a double break down.

Djokovic was unable to get back level in the opening set as Kecmanovic served it out 6-4 in 49 minute. The start of the second was a much more even contest between the two countrymen, as the top seed was forced to save a break point in a nine-minute game before the 22-year-old faced two break points in an eight-minute game.

It was the younger Serb who took the lead once again in the second set, breaking to go 2-1 up but Djokovic managed to break back immediately, raising his arms in the air to celebrate as the crowd broke out in chants of “Nole”. Now firmly back in the match, the top seed managed to clinch a crucial break to go up 5-3 and give himself the chance to serve for the second, levelling things at 6-3 with the fans continuing to cheer his name as the pair set down at one set all.

The final set was neck-and-neck until midway through, when the two-time former champion again managed to clinch a break, this time to lead 4-3. After holding serve, it was Kecmanovic’s turn to throw in some double faults as the world No 1 managed to break and close out the match 4-6 6-3 6-3 in two hours and 18 minutes.

By reaching the last four, the Serbia Open becomes Djokovic’s most successful tournament of the season. Before Belgrade, the world No 1 had played just two events so far this year, crashing out in the Dubai quarter-finals and losing his opening round in Monte Carlo last week.

Djokovic will next face the winner of a match between Karen Khachanov and qualifier Thiago Montero. The home favourite gets a day off before his next match and admitted he was “very pleased” he would not be facing a fellow Serb in the next round, saying it was a “very strange feeling” to share the court with a compatriot.

“There are very rare occasions when I am able to play at home and experience this atmosphere so I am trying to enjoy every moment,” the 34-year-old sai in his on court interview, thanking the crowd for their support.