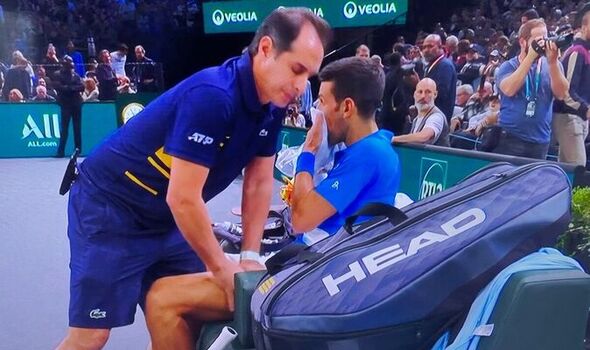 Novak Djokovic called the physio during the final set of his Paris Masters final against Holger Rune after the pair traded breaks. The world No 7 had been seen stretching his left leg throughout the set before asking the umpire to call the trainer when he broke to lead 3-1, and was tended to during the changeover after the next game after being broken back.

Djokovic called the trainer to the court after repeatedly stretching out his left left for what appeared to be a thigh issue during the third set. Despite the physical woes, the sixth seed was able to break the Rune serve for a 3-1 lead before he asked umpire Nacho Forcadell to get the physio ready for the next changeover.

But he was broken straight back by the world No 18 before sitting down at the change of ends, when the trainer appeared to work on his troublesome thigh. The Serb did not take a medical time-out, however, as he just received a massage on his thigh before continuing the match at the conclusion of the changeover.

His camp watched on in fear as the 35-year-old risked losing a match at the Paris Masters for the first time in four years, with his last defeat coming in the 2018 final against Karen Khachanov.

JUST IN: Holger Rune addresses controversy after rumours of feuds