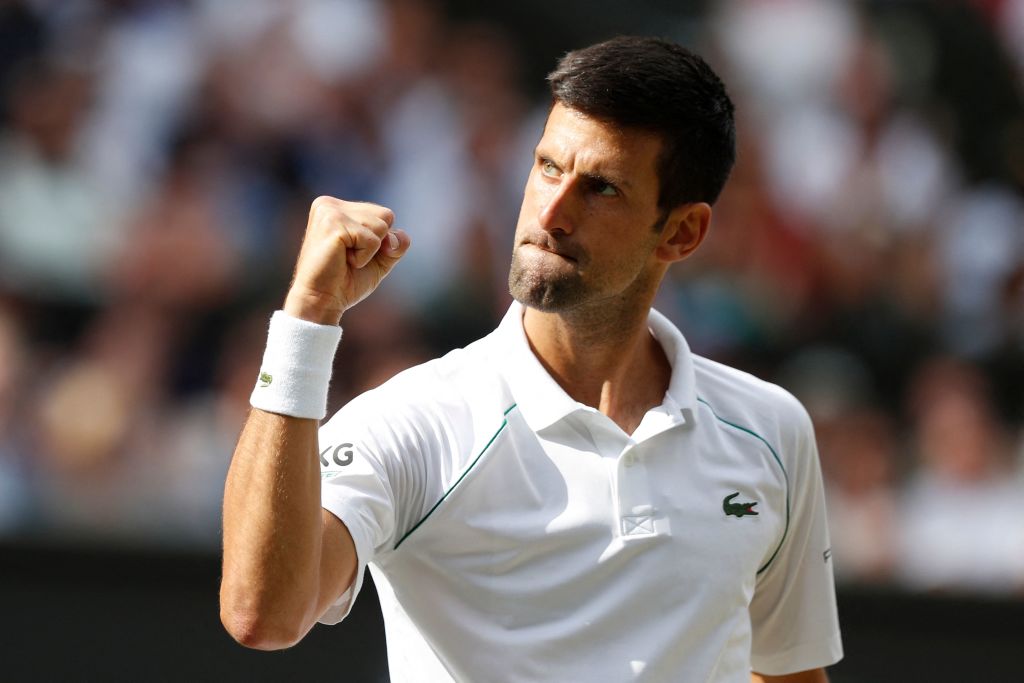 Novak Djokovic fought back from a set down against Matteo Berrettini to win the sixth Wimbledon title of his career and to equal Roger Federer and Rafael Nadal’s male Grand Slam record.

There was a sense that Djokovic, the world No. 1 from Serbia, was feeling the pressure of making history on his shoulders in the pursuit of his 20th major title.

With Tom Cruise, Patrick Vallance and David Haye among those watching on, he served three double faults in the first two games, regularly threw in nervy second serves under 80mph and missed a set point at 5-2 in the first before losing it in a tiebreak.

But once he got a foothold in the match Djokovic – with his absurdly good returning and defensive abilities – never looked like being beaten as he stormed to a 6-7 (4-7) 6-4 6-4 6-3 victory after three hours and 24 minutes.

This is a man, after all, who is virtually unstoppable at the moment. This was a third Wimbledon title on the trot and a third Grand Slam in a row. The Golden Slam – where a player wins all four majors and Olympic Gold in the same calendar year – is now firmly in his sights ahead of trips to Tokyo and New York. No man has ever achieved this before.

Who, at this stage, would seriously bet against him? He has won eight of the past 11 Grand Slam titles. Had he not been disqualified from the US Open last year, that figure could easily have been nine.

The win over Nadal in the French Open semi-finals will likely be viewed as the most significant of the year but this was another pressure situation he expertly handled against an in-form Berrettini.

In doing so, Djokovic became the first man to win the Wimbledon final from a set down since 2014, when he did the same with a five-sets win against Federer.

Queen’s champion Berrettini – the first Italian to reach a Wimbledon singles final – gave a good account of himself. He checked his own nerves after falling down a break in the first set and earned himself plenty of new British fans after a hard-hitting display on Centre Court.

But this was Djokovic’s day. This is Djokovic’s time. Djokovic is rewriting tennis history and he is the focal point.

History was made before the first ball was even struck. Marija Cicak became the first woman to take her seat in the umpire’s chair for a men’s final at Wimbledon.

After overseeing the coin toss and the players had gone through their usual warm-up routine – unlike in previous rounds, Berrettini’s left thigh was strapped – the Croatian official called for play to begin, with Djokovic to serve.

Another heavily-involved Croat was on court, too. Twenty years after his famous Wimbledon win as a wildcard, Goran Ivanisevic was sat in Djokovic’s box.

Djokovic started nervously. Two double faults in the first game and a horribly wayward mid-court forehand set up a break point for his Italian opponent, which was saved by a solid serve before the top seed held.

Berrettini started his first service game with a thumping 135mph blast and he held to 30 as Djokovic framed a backhand return long.

A third double fault in his opening two service games saw Djokovic dig himself into a hole at 0-30 but Berrettini netted when he really should have passed – which would have set up three break points. Instead, Djokovic held to 30.

Despite his problems on serve, when Djokovic was getting into the points, he was typically winning them and he set up his first break point of the match as Berrettini sent a lob wide.

That was saved with another mega Berrettini serve but he couldn’t find his first serve on the second break point and Djokovic sprang to his backhand side to divert a hammer forehand from his opponent back at his feet, causing the Italian to send a forehand wide.

Berrettini saved a set point with a huge serve – something he desperately needed more of – in a marathon eighth game to hold for 5-3.

Djokovic needed to do the same to take the opening set and wasn’t helped by Berrettini catching the line with a massive forehand winner.

He saved a first break point with a big serve and forehand combo but a nervous 74mph second serve allowed Berrettini into the point on the next and the Italian chased down a drop-shot before guiding a deft winner into the back corner to break.

A tiebreak was required to split them. Djokovic quickly fell 3-0 down but wrestled the mini-break back by the changeover as Berrettini netted a forehand.

Djokovic again surrendered a mini-break and a huge roar erupted as Berrettini brought up set point, which he duly converted with a thumping ace after 70 minutes.

Berrettini had never lost a grass court match after winning the first set but, not one to dwell on a setback, Djokovic roared into a 4-0 lead in the second set.

A tweener lob from the Italian got the crowd on their feet as he held to avoid a breadstick and a slip from Djokovic at the net set up two break points as he served for it. The second was converted after a drop-shot was chased down as Djokovic again failed to serve out a set.

Three set points came and went for the world No. 1 from 0-40 on the Berrettini serve but Djokovic finally found his groove on serve when it mattered to hold to love and to level the match.

Both left the court for a comfort break at the end of the second set and Berrettini returned with just his second hold to love of the match to kick-start the third. Djokovic followed suit.

Fans traded cries of “Mat-Te-O, Mat-Te-)” and “No-Vak, No-Vak” and the Serb-supporting group were rewarded with a break as Djokovic peppered the Berrettini backhand and he duly folded.

Walking to his chair, Djokovic put his finger to his temple – Stan Wawrinka style – and stared at his box, a sign he had a mental stranglehold on this match.

Djokovic’s nervy second serve reappeared in the sixth game of the third set as Berrettini had two break point chances but the Serb – made to wait for a serve on break point – cupped his ear to supporters as he saved both.

He did the same with his racquet after holding and was left smiling into the stands as he was met with replies of “No-Vak, No-Vak”.

Unlike the previous two sets, Djokovic served out the set at the first time of asking as he moved two sets to one up and there was a brief rendition of “Football’s Coming Home” in honour of the night’s other final.

Djokovic won the point of the match – and possibly the the tournament – under pressure at 15-30 in his third service game of the fourth set.

After some ludicrous defence, he sprang to a drop-shot and passed the Italian. Centre Court rose to its feet to applaud this great champion.

There were attempts to spur Berrettini on from the pro-Italian section of the crowd but Djokovic was stalking his prey. He broke in the seventh game of the fourth set after a double fault and the match was all but won.

Berrettini kept fighting and saved two match points in the ninth game of the fourth, and final, set but one more break eventually came Djokovic’s way and he sealed a record-equalling 20th Slam win while collecting a cool £1.7million.