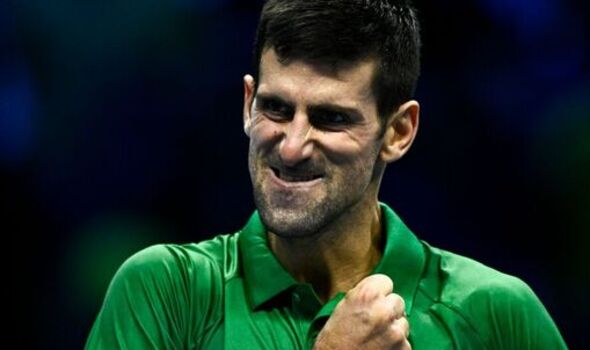 Serbian tennis star Novak Djokovic will bid for a place in the ATP Tour Finals when he faces American Taylor Fritz in the tournament’s semi-final later today. The world number eight is hoping to end the season on a high before jetting off to Qatar to watch his native country play in the World Cup.

Djokovic topped his group in the round-robin format competition beating Andrey Rublev, Stefanos Tsitsipas and Daniil Medvedev dropping just one set in the process. That set came in his final match on Friday against Russian opponent Medvedev eventually winning 6-3 6-7(5) 7-6(2) in what became his longest-ever match at the tournament lasting three hours and 11 minutes.

The Serbian had already qualified as group winner before his clash against Medvedev but refused to give in despite violently shaking at the end of the second set. Djokovic also had to run off the court at one point during the victory due to having issues with the contact lens in one eye.

Djokovic said that regardless of winning the group and already having qualified he wanted to get one over on rival Medvedev. He said: “I was a bit more nervous and tense coming into the match against one of the top players of the world, top rivals, that Medvedev is for me in the last several years.

“You want to win regardless of the qualification that I already have, the elimination he has before the match.” Djokovic has an unbeaten record against semi-final opponent Fritz winning all five of their previous meetings. The winner will face either Casper Ruud or Andrey Rublev in tomorrow’s final.

That will be the final match of the season for Djokovic who plans to take a trip to Qatar to watch home country Serbia in action. Serbia face Brazil in their opening game of the tournament on Thursday before further group games against Cameroon (November 28) and Switzerland (December 2).

Djokovic hopes Serbia qualify further in the tournament. He told Serbian newspaper Alo!: “I’d love to (visit the World Cup), even though I have a lot of work to do. I’ll try to go to a game; I planned to watch the finals – so that’s why Serbia has to play in the finals!”