Novak Djokovic had the conditions to thank as his quarter-final clash with Stefanos Tsitsipas was halted with the world number one in big trouble in Rome.

In changeable conditions on centre court in the Italian capital, Djokovic struggled to find his form as he lost the first set to Tsitsipas 6-4.

The Greek star was playing the big points much better than the Serb, who made some uncharacteristic errors in a difficult first set.

But any hopes of a second set fightback were replaced with more concern as Djokovic was broken in the third game of the second set to put him in big trouble as the rain came down in Italy.

Immediately after losing his serve and going 2-1 down in the second set, play was suspended due to the worsening conditions on court, with Djokovic’s stony expression hiding what was likely relief at some respite and the chance to reset before play resumes.

JUST IN:
Rafael Nadal has Reilly Opelka worry ahead of Italian Open semi-final 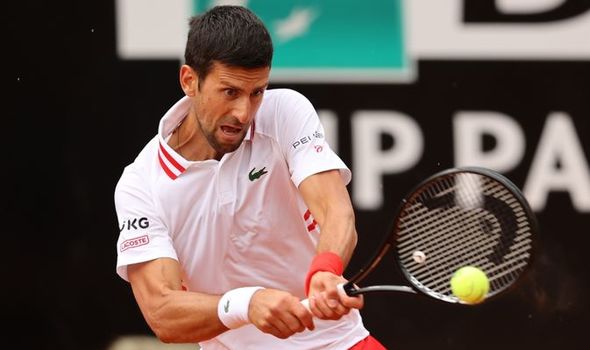 Despite outperforming his opposite number in terms of his serve statistics, Djokovic’s performance during the match’s pivotal points has so far been lower than his usual standard.

Tsistipas converted all three of his break point opportunities against the Serb, while Djokovic, despite creating six such opportunities for himself, was only able to convert one.

Nadal eventually ran out the straight-sets victor, defeating the German 6-3, 6-4, but later declared the surface of the clay courts in Rome as “dangerous” after suffering a fall and landing hard on his left shoulder during the first set.

Speaking after the match, Nadal explained that the inconsistency of the white lines on the court, with some raised above the level of the clay surface, made conditions tricky and led to his fall.

“It was very clear what happened,” he told Amazon Prime Video after his win.

“Some lines are higher than the rest of the court so when you touch the line it’s dangerous. That’s it.”

But, despite his injury scare, Nadal declared himself satisfied with his performance as he eased into the final four of the tournament.

“Yeah, I’m happy. I think I played a very solid match with not many mistakes, playing the way I have to. Important victory for me again against a great player,” he said.

“I’m happy. Semi-finals here in Rome one more time, confidence for myself and another victory against a great player so very pleased.

“I think I played more solid than in Madrid. At the same time conditions are different.

“In Madrid, he was able to create a lot of damage with his serve and then with the first shot here, the situation is a little bit different, a little bit more normal conditions on the clay.

“I was able to control the game a little bit more than in Madrid where the ball was flying a lot and it was difficult to be under control. At the same time, the main thing is that I played well.”