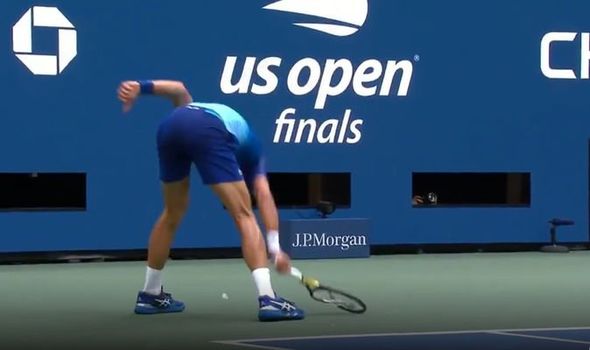 Novak Djokovic smashed his racket in a fit of rage during the US Open final as Daniil Medvedev grabbed the ascendancy in the hunt for his first Grand Slam title. World No 1 Djokovic was the favourite heading into the tie as he looks to cement his place as the greatest player of all time.

Djokovic entered the final looking to pull away from the Grand Slam record he shares with Roger Federer and Rafael Nadal.

But Medvedev wanted to show that his time had come to win a major title and shot out of the blocks.

The Russian stormed to a 6-4 first-set win in just 36 minutes.

Medvedev then had Djokovic on the ropes at 2-2 in the second set and the Serbian lost his cool.

Djokovic let out a huge roar as he slammed his racket into the ground three times with his frustrations boiling over.

The umpire handed Djokovic a warning and he had to head back to his court-side seat to fetch a new racket.

When play resumed Medvedev got the break he was looking for to really take control of the tie.

It is not only a 21st Major that Djokovic is hunting against Medevev because he is also looking to complete the Calendar Slam.

“I’m going to treat this match as it’s my last one because it’s arguably the most important one of my career maybe,” he said ahead of the tie.

“It’s going to be a battle against another guy who has been in tremendous form.

“He’s already had couple of Grand Slam finals behind him. ]

“I think experience-wise it’s different for him now. I’m sure he’s going to give it all to win it, to win his first Slam.”

Of the records, Medvedev said: “If I can make this, I’m probably [going to be] be in the history books a little bit somewhere but I don’t really care about it [stopping Djokovic].

“From one side, for sure he’s going to feel the pressure a little bit about it.

“From the other side, that is what is going to make him be even better in tough moments.”