Novak Djokovic kept up his 100 per cent record in Australian Open semi-finals with a straight sets victory over Aslan Karatsev. The 27-year-old was competing in his first main draw of a Grand Slam and became the first man in the Open era to reach the semi-finals in his debut.

Wins over Diego Schwartzman, Felix Auger-Aliassime and Grigor Dimitrov set up a fascinating battle against Djokovic for a place in Sunday’s final.

Djokovic admitted to knowing little about Karatsev ahead of their match, but insisted he wouldn’t underestimate the world No 114.

The Serbian was still the strong favourite to advance though having never lost a semi-final at the Rod Laver Arena.

And he looked unstoppable in the first set as Karatsev had no answers to get past Djokovic’s incredible defence. 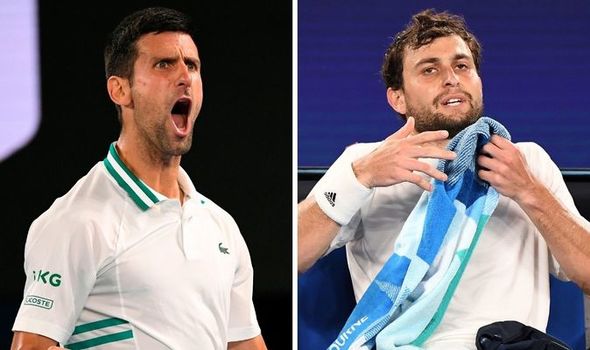 The world No 1 comfortably took a one-set lead and looked on course to quickly take the second after a double break.

But Karatsev began to show some fight and broke back before having a chance to level the set as Djokovic had several set points.

Djokovic held his nerve though to serve out for the set to give him a big lead and all-but kill off Karatsev’s hopes of an unlikely comeback.

The second set victory clearly meant a lot to Djokovic as well as he screamed in delight towards his box as well as having a momentary reaction to some boos from the crowd.

Djokovic rarely loses from this position in any tournament, but at the Australian Open he’s almost unbeatable.

Karatsev put up a fight to break back after losing his serve in the first game of the third set, but he was unable to consolodiate in the following service game and his head appeared to drop.

Djokovic broke once again as he unrelented in his bid to get the match wrapped up as soon as possible and did so in typical fashion.

He now has two days rest before Sunday’s final where he will face either Stefanos Tsitsipas or Daniil Medvedev and Djokovic is looking forward to watching the match.

“Ye I did watch it, from midway third set I thought Stefanos did incredibly well to hang in there,” he said.

“Rafa was playing amazing and dominating the match and then somehow he turned it around Stefanos, he played a really solid tiebreak and then he’s in the match.

“It was a high-quality match, probably the best of the tournament so far.

“Speaking of the high leve, Medvedev is the guy. He plays on probably the highest level over the last three or four months.

“He’s on a winning streak, winning indoor tournaments, World Tour Finals. He had one Grand Slam final at the US Open and Stefanos has never reached the final so it’s going to be interesting to see them. It’s always a really high intensity match between the two of them. I’m gonna take the popcorn and enjoy it.”